Posted on March 6, 2017 by Stanley Fefferman 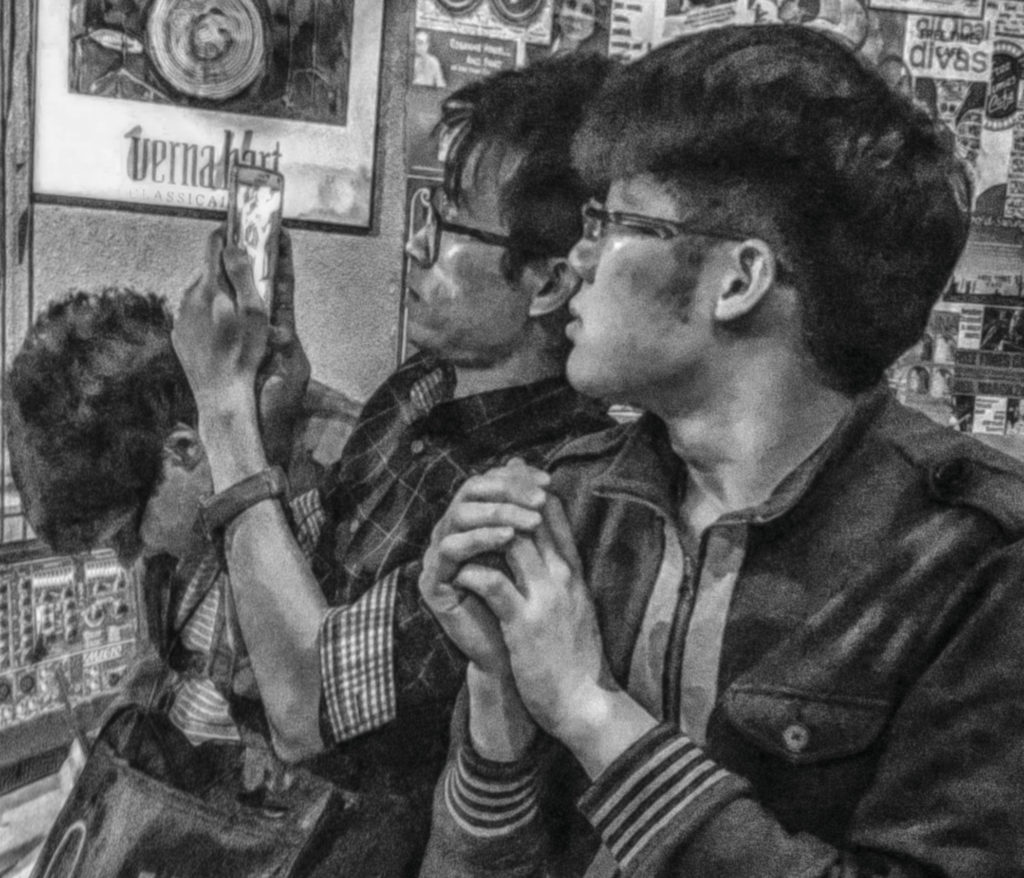 One January evening, as I was sitting in the Free Times Café listening to Vanessa Shields read at the Art Bar, I was impressed by three boys at a ringside table paying attention in a way that suggested they were a team: one was taking notes, one was getting a photograph, and one was listening. I was in a kind of host role, so at the break I introduced myself. The photographer said, “O wow, what an honour to finally meet you. I am Steven Takatsu, winner of the 2014 York University Stanley Fefferman Prize for Creative Writing.” Nice. After more niceties I said, “So what’s the deal here? Are you guys a team?” Steven introduced me to the note-taker, C.J. Garrett and the listener, Aaron Sheng, and showed me a copy of their anthology–APPARATUS, published by Inspiritus Press. I bought a copy.

Here they are, plus one, a few weeks later, doing a group reading at the Art Bar open mic to promote their book APPARATUS. Since then, Takatsu and his team have been beavering away launching and promoting the book and INSPIRITUS PRESS. The lengthy synopsis of the work in APPARATUS is my way of adding a puff of air to the already billowing sails of this team’s enterprise. 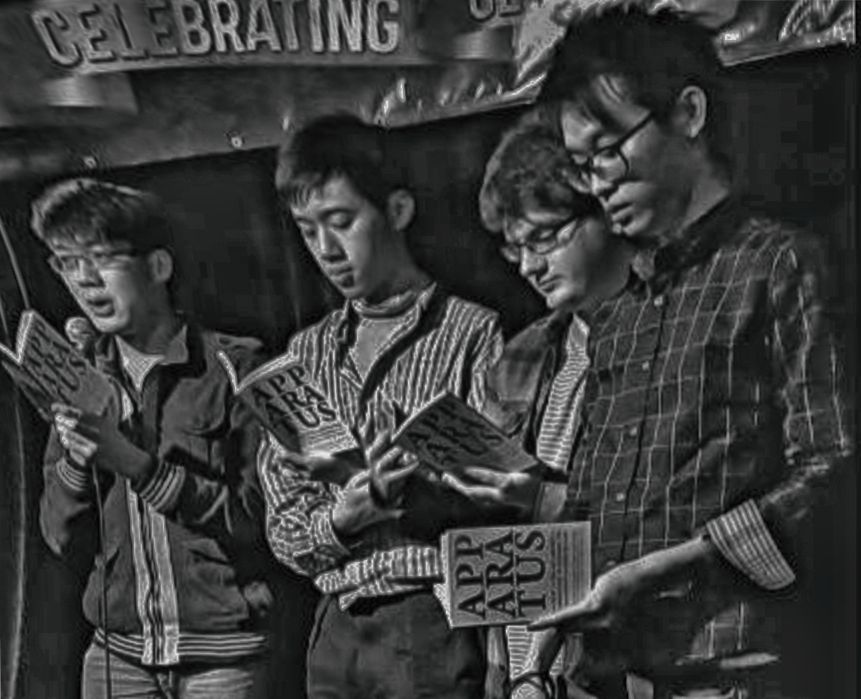 Takatsu’s first contribution (50 words) “Polished Brown Loafers” begins with a head-to-foot scan of a man on an empty train, and surprises with the lines “and twelve toes/ that count the feet.” His second piece, three pages of visionary prose titled “Something Holy,” begins as a starry night-sky hilltop contemplation accompanied by “Paganini violin solos, Clark Terry trumpet calls.” A holy celestial body appears as a voice: ” I feel her hand slip lower and start to unzip my jeans…Her breath catches as she feels how hard I am….” The narrator surrenders to the moment, and feels himself enter her, first his hand, then all of him slides into ‘her’ down the frictionless path along the depths of her uterine canal. At his moment of release, the “I” hears her say “This moment will be gone the next.”

C.J. Garrett has two poems: “Glory be to the sky,” and “Dead Flies,” both blending celestial and terrestrial visions: “veiny appendages, / stretching beyond, / celestial….” Both poems are short. “Dead Flies” posits an electronic aspect to universal energy: “Still the frequency screams/ Of dead flies fucking.”

Aaron Sheng’s “Patchwork Zombie” constructed in more than 10 mostly 4-line stanzas, is a dramatic monologue addressed variously to: a dismembered entity; “Happy patchwork zombie/ Do you miss your (limbs) so/ that much?”; to a sad child; and to an entity known as “Sir.” The argument of the poem concludes regretfully, like the nursery rhyme “Humpty Dumpty”: “There was a girl playing with her doll, /her head was torn off, / and her mother couldn’t put it back on, / not the doctor.”

APPARATUS (if not specific poems), is illustrated passim by grey scale close-up photographs of smooth skin-folds and wrinkled sections of human anatomy that are suggestive of parts, but do not allow the viewer to identify them with any certainty.

Opening the anthology is a story by Collette Thomas about a girl who gets the idea her elbow is disturbing her sleeping lover, so she wakes him to explain her theory that humans could be designed better if they had “Detachable Limbs.” Evan Hoskins follows with a poem set in a library washroom where he contemplates the emotions of another person looking in the mirror, and wonders “did he berate his mirror self?” In N.J. Greenfield’s three-page prose piece “The Beat,” the ‘I’, enslaved by a ‘Beat’ only he can hear–“I had the beat, and the beat had me,” imagines performing various ‘heroic’ actions: he prevents a knife attack on the stage of a theatre and earns audience applause; saves a boy from being hit by a car, rescues “a girl in a river,” imagines applause from his neighbours for the quick way he showers, cleans, cooks, to ‘The Beat,’ “did everything in one-second bursts,” while outside “passersby…all walked at entirely the same pace.”

Aaron Capelli has two poems uniquein the anthology for the way their language forms precise images that move along formal rhetorical lines: “Unsteady music, unsteady hands/ lay bare the faultwork of our griefs.” and “Hurt, luminous, you cross/ the border while white dust/ inundates the air.” Skyler Clarke wonders whether persons are “Identical ball bearings”. Daven Sharma with two poems, is interested in green, growths, insects, and “faith that grows like grass/ when watered and kissed”. B.J. Powe has a story “Cathode Halo” that depicts a time when “Black-and-white rays bathed our squirming bodies” while “Discovering sex in front of the TV”.

Thomas Arthur Farrell shares a joyful story of car trip with his girl when they pick up a farm-girl hitchhiker in Nebraska and the three of them, “excited as children,” spend ecstatic time together. Nikita Shorikov’s, prose story “For the Sand,” is an elegant fantasy that begins with these graphic lines: “A nude man and woman stand in a white box, a marble bedroom jutting from the fine sand of a desert like the world.” Deniz Sonkan has a short poem that is a vision of “Dead Bodies High on/ soporific Depressants” from whose ‘cum’ “Lowborn Life struggles to its end.” The title is also the last line: “I’m Yours Forever.” Sierra Marilyn Riley has a 6-page poem entitled “Sneakers”, about British Columbia and the”human feet in running shoes [that] have been found washed ashore along the Salish Sea.” I googled this topic: check out for yourself the realities that come up.

Parts of “Sneakers” are found poems–lines from various ‘reports’ and recipes for ‘on the beach’ cocktails. Parts are personal reflections: “feet are oddly intimate to me/feet remind me of my ex lover”, and “I wonder if my ex lover’s feet remind him of me.” Most reflections and found bits trigger reminders of “another drink.” The graphic following Riley’s poem is the only one that totally looks like something–a bare foot with unevenly uncut nails and wiry black hairs on the knuckles.

So there it is: the poems and stories in APPARATUS, each one speaking for itself, as much as possible in my way of writing. Taken together, the works of these 15 writers articulate  a vision that Takatsu and his team had as seed when they started the project. My time with this book gave me some things to tease my mind with. Let’s see what happens next.

In this book, the physical body and its relationships are celebrated, examined, distorted, degraded, dissected, exposed, moving from gritty and grotesque to transcendental and surreal.