Posted on March 3, 2017 by Stanley Fefferman 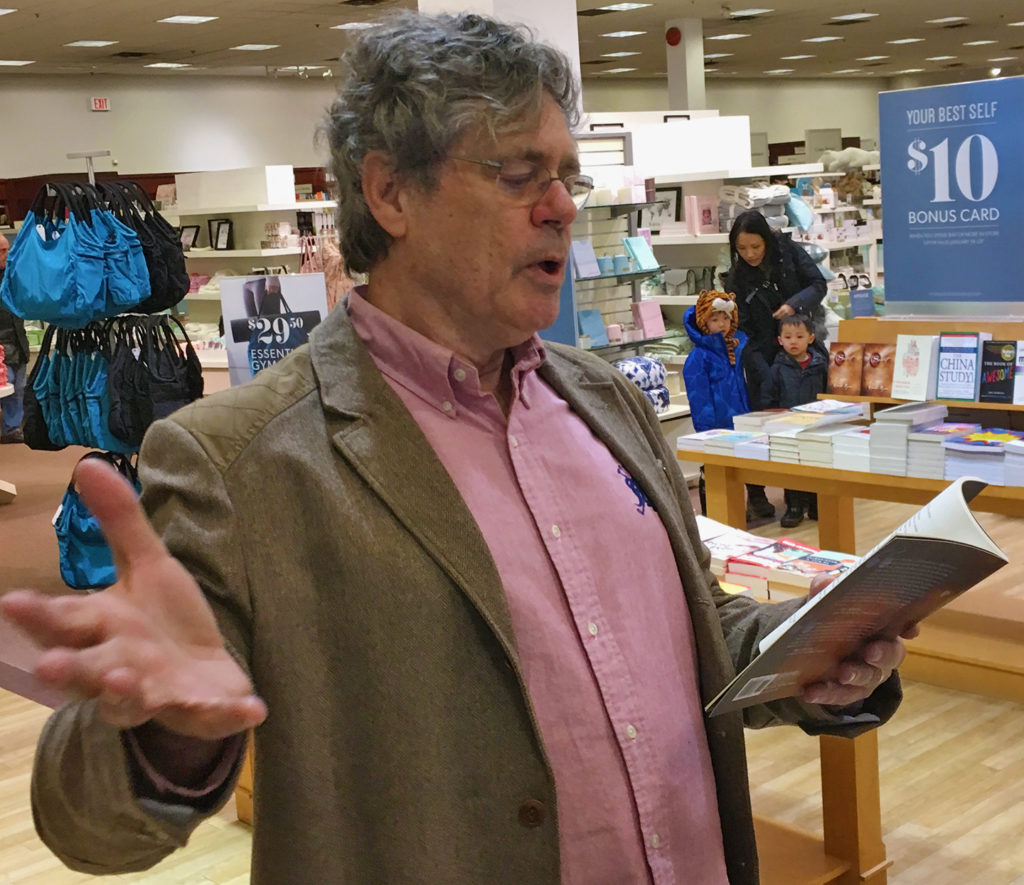 This is a boots-on-the-ground review. I caught a moment with three people hearing Laurence Hutchman read a poem from his book at the Chapters bookstore in Oakville, Ontario. You can see for yourself that when Hutchman reads, he is wide open. You can also see that the boy seems riveted by the reading, while the girl’s attention is only glancing off the poet. The woman’s mind is someplace else she wants to be and she is tugging at the girl’s sleeve to take her away. As it happened, a moment after I got this image, the woman and the boy turned away, but the girl held her ground until the reading was over. 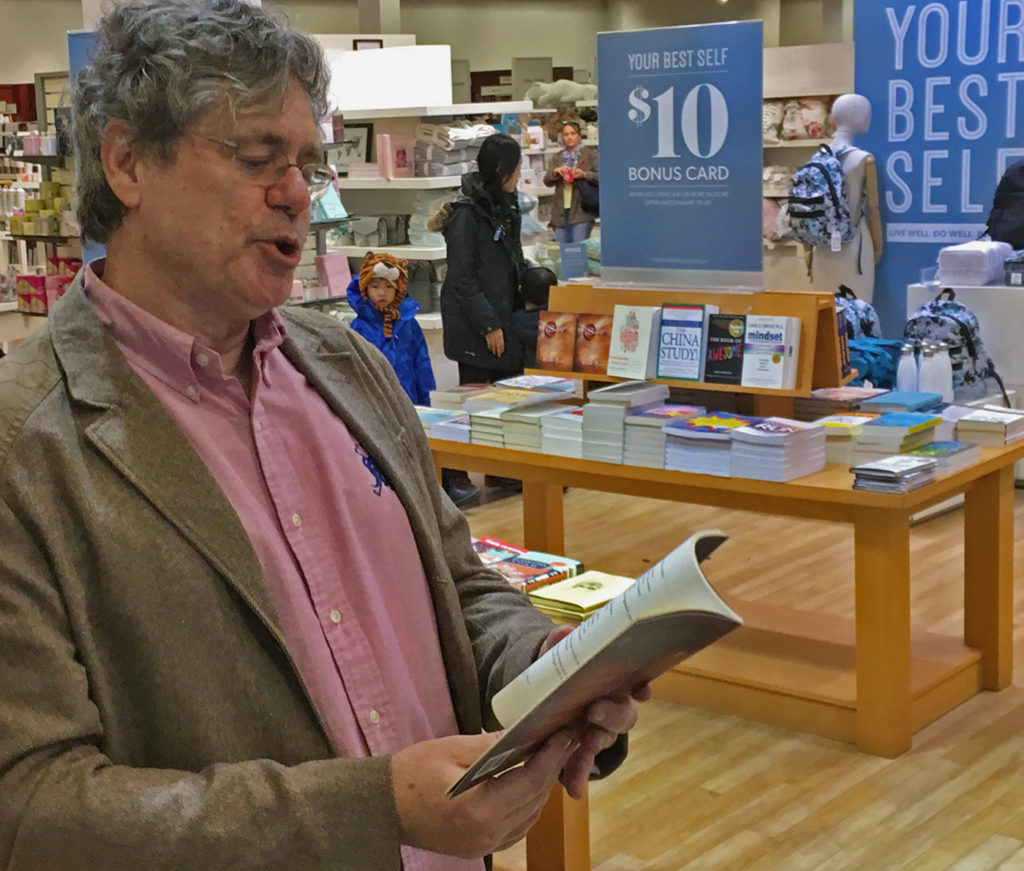 By calling this part of my review ‘boots-on-the-ground’, I mean I am not writing my opinion of Hutchman’s work. I am reporting what I saw happen at a reading of his work, and what qualities of his work you, gentle reader, can see for yourself in the picture I am sharing. Beyond that, you are invited to join me in wondering what Hutchman’s performance was doing to the mind of that girl, which qualities of his work might be holding her in thrall. Is she looking into her own future.

Hutchman’s features are full of expression, and his position in the venue speaks of boldness. He commands the space. Hutchman did literally command the space. Management had given him a table near the bookstore’s mall entrance on which to display his books, where he could sit, chat with customers and sign the books he sold. He was not set up for a reading. However, when the mood came over him, Hutchman popped out from behind the table into an open space and powered up a reading whose energy rooted a young girl to her spot while her family walked away.

” My thoughts are always polishing my childhood/ Till it’s become like a hard diamond/ Unbreakable, to cut/ Into the cheap glass of my maturity”                 Yehuda Amichai

My opinions of Two Maps of Emery begin with a reprise of Hutchman’s excellent qualities evident in the photographs: a wide-openness, a boldness of expression, a sense of command, and a fearless determination to say what he has to say.

Hutchman’s poems tell about Emery, the people of the town (now swallowed by suburbs at the northern edge of Greater Toronto) where he grew up. He celebrates the people who named its geography, the cast of his primary and collegiate schooldays, and the history, dwellings and landmarks bequeathed by the town’s founders.

The poems tell stories and details of the decade between 1957-1967, the years Hutchman’s family moved from Northern Ireland to Emery, through the end of high school, a time, he writes, “we read Cohen and listened to the raspy voice of Bob Dylan on the Sea-breeze record player.” The first three sections, rely mostly on the map of his personal memories. In the final group of poems, we see Hutchman, from 1993 to the date of publication, 2016, tramping through the now overgrown vacant lots of his childhood, visiting the abandoned farms and the surviving elders of a town that no longer exists, in order to reconstruct stories of the town’s founding during the War of 1812, through many other wars, through the lives of their damaged survivors, and the stories of those who grew the town, like the set of “a silent film” for the 150 years it took for the Hutchmans to arrive, and for young Laurence to make his run.

Two Maps of Emery is a highly detailed epic narrative. Until you read stanzas aloud you could be forgiven for thinking Hutchman is writing chopped prose; however, when you feel the rhythm of this lines rolling out of your chest past your lips you cannot miss the poetry, and high poetry it is. Some of the best poems, miniature portraits, are dramatic monologues, worthy of respect in the tradition from Browning to Berryman. What sets Hutchman’s work apart from his peers is his love for, his congruence with his ‘townspeople’: Simeon Devins, Robert Grubb, Reaman Castator, or the anonymous Clairvoyant who says:

There are many things that men have to learn,/but they go on earning their living, my living is already learned right here/rocking in my night chair,/seeing the dark side of the moon.

No matter how detailed the flow of information needed by the historical narrative, Hutchman inevitably heightens the tension of drama in the ending lines of a poem:

Grand Trunk is building a railway through Weston

and my father’s company in due course will be bankrupt.

I am Robert, his eccentric son.

I write my poems on the margins of his life.

No matter how homely its warp and weft, Hutchman’s canvas is shot through with lines that twinkle into memory:

“…their tractors navigating the warm sea of wheat.”

“…that nameless farmer/like an old god guarding the hilltop.”

“then we headed home/with chestnuts ripening in our pockets.”

“a museum with wires, railway ties/ and road stitch the world together.”

“I can imagine flour rising through the moonlight/as the massive Lawder borthers heave/the barrels into the waiting wagon….”

“He was the world’s greatest storyteller./You only believed a quarter of what he told you.”

The ‘storyteller’ in this last quote is one Major ‘Lex’ MacKenzie: his name inspired me to characterize the start of this essay by the military term ‘boots-on-the-ground’ because I travel a highway, named after him, because he was wounded at Vimy Ridge, where he picked up a rifle and shot the sniper who had just killed his friend, and because his name comes up in a conversation between Hutchman and his friend Jean who recalls that his uncle’s brother ‘Lex’ once “delivered goods for the Wallace brothers/driving the wagon early mornings down Albion Road” (another highway I regularly travel). What is personal for Hutchman easily becomes personal for me because I lived for many years up his way. What is mysterious, but somehow easy to understand, is how what is personal about his time in Toronto becomes personal for me about my times around the ‘Main’ in Montreal and in farmland south-east of the Laurentians.

‘Boots on the ground’ is how Hutchman moves through the territory of Emery, past and present, retracing the footsteps of his younger selves, and the footsteps of the women and men who lived in Emery, who moved through hockey and baseball games, followed funeral processions, marched in wars, gave their names to local developments, or like Elizabeth Arden, to the world. Two Maps of Emery, “a poem containing history”, is an epic poem, in which people and places in the minds of children grow to mythical status equal if not higher than the heros of their day: Bobby Curtola, Frank Mahovlich, Gina Lolobrigida, Victor Borge, Bliss Carman, Ian Fleming, Llyod Bridges, Bob Macadory, Doctor Seuss, Mussorgsky, Don Messer, Les Plouffes, Rimbaud, De Gaulle, Valery Brumel, Commader Brock, Roddy McCorley.

The name Roddy McCorley brings to mind Irish song, and that links me to poems with lists of famous names in them that, like Two Maps of Emery, also commemorate what was remarkable in people familiar to the poet, and that link leads to Yeat’s Easter, 1916. I do not compare the ‘terrible beauty’ of Yeats’ short poem etched in acid with the epic canvas of Hutchman’s book made with a softer tool. However, the coincidence of both poems lead me to this speculation: how much does Emery, a very homegrown Canadian book that deserves to be celebrated for being just that, owe to the root of Hutchman’s genius whose seed and early growth was in Northern Ireland?  I offer this speculation about the synergy of immigrants and homeland as timely during our present era when voters and, heaven forbid, military forces, are looking to put boots on the ground.