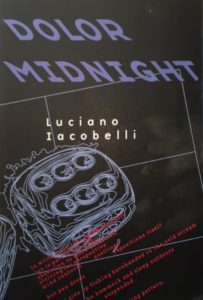 There is a poetry in gambling and Luciano Iacobelli has written an important book about it. As a child watching the neighbourhood men play dice in the streets, he felt “the poetry crawled across our young souls….” Like poetry, gambling is an art. The energy of gambling inflames Iacobelli’s language to a high level of poetic speech. ” I come to practice my art…/so that when death arrives/ it’s features will be known.” Iacobelli is a kind of Canadian François Villon who finds glory in his vice: “…it’s always my falls that summon miracles/draw up enough compassion and grace/to bring forth angels.”

Dolor Midnight is a rich tapestry of stories: portraits of gamblers, anecdotes of addiction. Iacobelli is honest about his own addiction: “take a 16 hour bus ride to New Jersey…/play 3 or 4 hours just to quell the fever/then return home to be back in Toronto by Monday morning/in time to teach my first class.” In the seven sections of the book, Iacobelli writes fascinating poems about the history of cards, dice, horse-racing, casinos, the habits of gamblers, and he reflects brilliantly on the kind of things that go through the mind of a player : “How many birds will land on a branch”; “some say luck can be trained/ you can whistle and it comes.” His speculations rise up from philosophy to religion: “what counted was how nothing became something/how a fish and a loaf/multiply into/ feast.”

Iacobelli’s wit churns out surprising one-liners: debt is “a sea weighed down/ by its own salt”; nostalgia is “hope walking backwards.” These are very satisfying to read. But, at the heart of his book, is Iacobelli’s effort to articulate why the gambler is driven to take risks after losing. He asks whether it is a “genetic disposition…/or chemical wave washing the brain”? If so, is gambling a vice or a disease? He doesn’t settle on either of these alternatives. Rather, he moves the issue to the spiritual level: taking a gamble is “an attempt to outrun the weight/return to the original lightness.” If that is the case, who can point the finger at “tossing dice for the last time/ a sick old yellow man wears an oxygen mask/ and who is to blame him….” Iacobelli’s art is both ruthless and compassionate. If I had to choose a single word to describe the poetry of Dolor Midnight, that word would be ‘redemptive.’