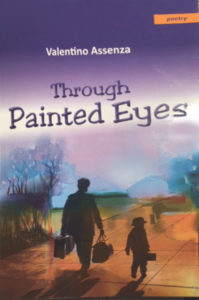 Here are some admirable lines from Through Painted Eyes, Valentino Assenza’s first full-length collection of poems: “that precious/subliminal taste/of the past through/my senses.” These lines say that though his form resembles chopped prose, the lines are in fact made up of ‘spoken word’ held together by the real voice of a sensitive personality. Assenza’s memories come through his senses, and this conveys the livingness of the episodes and characters making up his personal epic journey into the past. Whether he is chronicling growing up with his mother in Toronto neighbourhoods, or among relatives in Sicily where he spent summers with his father, Assenza’s memories carry with them a sense of life: “my father peeling/me a cucumber from/the garden,/ and a lizard/crawling across a stone wall.”

Through Painted Eyes contains a gallery of portraits, notably Assenza’s father, grandfather, relatives and neighbourhood characters drawn so you get what these people meant to him, and still mean. The portrait of Jack the barber and his ‘victims’ is touching and deft, conveying a sense of neighbourhood life in the class of Laurence Hutchman’s Two Maps of Emery, and that is makes me think somebody should appoint Assenza poet laureate of a Toronto neighbourhood, perhaps Leslieville.

Whether he writes about life in Sicily or in Toronto, many of Assenza’s spoken words are in the Sicilian dialect, and he scatters phrases throughout these poems, where they function like charms and spells and incantations summoning up a richness in the mouth that is one of the more rewarding effects of reading his work, all the more so if you’ve had a chance to hear him read. “The Tobacconist” is one of his best in performance, where you also get a strong sense of how at ease the author in his world where he is happy to fit in. There are dark touches in the poems due to separation, death, and failure of ambition, but  remarkably, there is not a trace of alienation in Through Painted Eyes.