Tom Gannon Hamilton reviews LOVE IS A SIDE EFFECT OF LIFE, poems by Andy Lee

Posted on December 12, 2019 by Stanley Fefferman 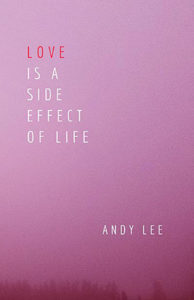 From the first poem in his book, the elements of Andy Lee’s refreshing style are clearly in evidence. Contemporary poetry can be many things but its two most baleful tendencies are polar opposites: on the one hand, a-rhythmic windiness and on the other, self-constraint leading to a sort of cryptic shorthand. Luckily for the reader, Lee writes outside the magnetic fields of both schisms. His concise forms marry natural diction with a hitherto unvoiced metaphysics — to crystalline effect, as in “Astral Travel,” which perceptively juxtaposes ways of knowing: “sea knows your secrets; I know your ghost”; the subject (lover) is at once engulfed, concealed and known by a dense, vast, impersonal (presumably social) medium but the speaker (poet) knows the ethereal soul of the beloved, who, in turn substantiates him: “I ascend from your depths, reformed from ether to fibre.” Thus, a lover’s experience: self-realization through immersion in the world of the other, is brilliantly enacted.

Original imagery flows in thought-provoking juxtapositions, to express ideas that prosaic verbiage could never approach. As if stating the claim for all verse, the nameless is named through a turning of the subject matter; “mechanical jackals” of the cybernetic present yield to the classical — “chariot piercing the pale horizon.” Elsewhere in this collection (“Reverie”), our specific historical moment meets the universal; passing “between colossal capitalist columns” the speaker’s “revolución” (a triumph of consciousness) manifests as an “inverse freefall… into the soft cosmos.” The title “Never Leave a Burning Child Unattended” cleverly blends adages that warn against being careless with open flames and neglectful in the supervision of kids. In our daily routine: “recycled daylight,” the “destructed” combines dissolution and distraction — a mood enhanced by constructions such as “prehistoric punchline” and “amniotic ocean.” There’s a sense of intimate solitude, further developed in “Bumbling Through Love,” a comic indictment of online dating.

In “Love Is a Side Effect of Life,” the title poem, the “desert” and the “Pacific,” present a geomorphological leitmotif that will resonate with most readers. Lee conjures the beauty our forebears knew, embracing objective and subjective, natural and social domains in primitive oral/poetic imagery. The speaker detects a latent danger in clouds, situating us on the same topography as those dead sages, for whom everything was a sign to be interpreted. Today’s faded emblems are contrasted with ancient, more potent associations of Eros with death: a reverse birth of Osiris alluding to the Egyptian god, also the Greek myth of Orpheus, both involving resurrection. To strengthen these already potent archetypes (he) awakens alone, bleeding from your kiss — an utterance that transcends its vampiric connotations to sustain the poet’s juggling of solitary with interpersonal or personal with global concerns.

Our preoccupations with love, beauty and art can get pretty stodgy, but Andy Lee keeps it light in “Loving You Is a Cloisterfuck” wherein we are treated to the poet’s characteristically vivid metaphors: “You redact me for the last time / Heatseeker still locked on my heart.” “From Love’s Gutter” gives us dad, dyad and dead in a single breath and the near oxymoron “next nostalgia” suggests the mutual saturation of emerging circumstance and memory — a familiar though generally unvoiced state. In “A Country Song,” “a buffer between your heart and his charisma” hints at something equally subtle and elusive. “Desert Poem” reflects on the atonement that follows upon error. “Exit Wound” is a double entendre focusing on the severity of injury one feels when a bullet or a lover leaves us.

In “Hunter,” “Conch,” “Sea Dream” and “Death in the Evening,” we find emotionally available, enigmatic allegories for physical affection; the poems are sequenced so as to lend them added layers of context and enhance their meaning. “The Periphery of Memory” offers some especially appealing lines: a series of clauses running from as time shears your mind away to we are sliding back to love. “Seeker” points to a dream’s capacity to resonate beyond its own temporality; so we are primed for the most compact, gemlike poem in this volume, “Tender Trap,” which reads: “headlong plunge into / your tender trap / I come in pieces / against your hard surfaces / pre-demented, / ready to tango.”

Embodied in the ensuing group of poems is a critique of the electronic ethos; this follows, in true dialectical fashion, from poems earlier in the book that venerate the sagacity of our ancestors. “Carbon Copy” “hones in on certain cyber-age excesses, the digital soup, the simulacra in which humanity might altogether go missing. The pithy phrasing in “Generation Hexed”: “addicted to next… craving a glib fix… broadcasting personas… lifetime of waste”, braces us for the salutary dictum advanced in “Poetry Shall Persist”: “to make the ineffable indelible” — which rises like a mission statement from the printed page and sets up “Final Call” with its vision of poetry as DNA, against a backdrop of soporific skies and its bold directive that could be an epitaph: exhume and resurrect my words so I live infinite.

Love Is a Side Effect of Life is full of speech-enriching takeaways. The most substantive poem is saved for the end, its rhythms working effortlessly through euphonic strophes: the “oxytocin has oxidized”, and “in a vision she’s breastfeeding a blue whale,” towards the consummate agreement of content and form: “straining to recall the harmonies of a long forgotten song”, the book’s suitably musical conclusion. We have a beginning here too, insofar as the poet is bound to scope out an ever-broadening vista. One of Canada’s best emerging poets, Andy Lee brings glad tidings; the stylistic achievement in this sample of twenty-two poems bodes well for the future of Canadian Letters and for the literate world in which humanity is re-invented.