Posted on March 2, 2019 by Stanley Fefferman 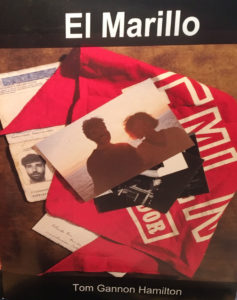 El Marillo is an elegaic work of great passion focused on Hamilton’s late wife, Rhena Hymovitch, and her humanitarian passion to bring ‘boots-on-the-ground’ aid, relief and protection to thousands of displaced ‘campesinos’ during the 1980’s in El Salvador where she lost her life.

El Marillo  commemorates the thirtieth anniversary of her death with poems that record the brutal conditions she and Hamilton worked under from 1984-88 when Hymovitch drowned. The book concludes with a handful of poems in which Hamilton reflects how the passing years have been marked by his devotion to his late wife’s memory.

Hamilton’s verse forms are, as he says, “a consequence of extreme lived experience matched with a poet’s imperative to give it voice.” His lines are filled with facts: “penecillin, amoxocylin, tetracycline, Imodium, with no expiry date/ later than ours we hope….” They also record actions: “…finally we sneak under the bridge turret and sleeping/ machine-gunner as we cross Rio Lempa, then traverse the playa seca,/ to the pueblo, El Marillo, with our forbidden medicinal cargo.”

The thought lines run in long  narrative and discursive stanzas sometimes marked by a complexity of rhythm, a loftiness of diction, and a profundity of thought that blossoms into a more traditional mode of poetry:

Hamilton’s verse often rises to an eloquence that extends to the limits of speech in lines like ” No hand/ is big enough to cover the river’s bloody mouth…” and, “oblivion/ pure, unmitigated nothingness compels him to pray.” The latter line is from the closing poem of the book. Entitled “Susto,” it serves as the concluding portion of Hamilton’s elegy or lament for the dead, in which, traditionally, the grieving poet reconciles himself to the loss and experiences a realization that allows him to let go. Through the closing lines of the poem, in the formal elegaic manner, the poet uses his ‘susto’, the illness of his grieving, to liberate both the memory of his beloved and himself: “yet, with susto./ you take up and face what you’ve long been seeking/to exorcise: the dread you must embrace to extinguish.”

Tom Hamilton’s chapbook is so personal and so intense, I have to let go of some lines that leave me in the dark, even after several readings. It is possible their darkness forms a part of Hamilton’s intention, as he seems to indicate in the closing lines of this remarkable poem: “bituminous train cars,/ their tomorrows trail off; each day/to follow they ‘ll see me, not whole, but if not for the darkness, they wouldn’t see me at all and they wouldn’t know.”

El Marillo won 1st place in the 2018 Big Pond Rumours Chapbook Awards. I say it possesses the ‘gravitas’ to earn a permanent place in the archives of this country and beyond.