Posted on March 8, 2017 by Stanley Fefferman

Adebe DeRango-Adem’s poems are ‘brilliant, cryptic, telegraphic.”* As I read Terra Incognita, the brilliance of her lines is, like what Bob Dylan sings: “She wears an Egyptian ring that sparkles before she speaks.”

Whether there was light before language
matters little;
what we need are not the words
to describe the broken
glass but how the light dances
off the shards. 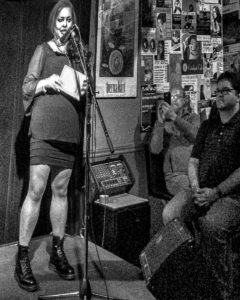 Adebe’s lines sparkle”before she speaks,” and after she speaks, because they are cryptic–her language is always two, and not-two, images are multi-aspected poetic optical illusions, each hiding/revealing the other: black/white, lover/activist, poet/person, woman/child.

I will not comment on how she manages the dialectic of her personae: she just does. About her engagement with the black/white struggle, or that of the mulatto, or the marron, all the shades of her people, I say that she stands up for them in poems such as “blues for Baraka, in memoriam,” “everyone wants to be DuBois,” or “blood root”(after George Elliott Clarke), a poem that takes its refrain from from “Strange Fruit,” the 1939 anti-lynching song made famous by Billie Holiday and Nina Simone, but was written by a White New York Jewish Communist School-teacher and poet, Abel Meeropol.

Adebe embraces the irony of dialectic:

I suspect all angels

of history are also half-caste,
phantoms that they are, and that history is

Adebe’s poetry is telegraphic because it comes down lines from far away:

All the immense images in me
or of the me I had been,
far-off, in another kind of kinship,
I was once a powerful landscape,
pulsing with the life of the gods.

It is telegraphic because Adebe writes her lines in code, her own poetic Morse:

poise your song into a set of words
that no one knows, musical lines
like blood lines that oppose
that cancel to reveal
that mystify to expose

Her telegraphic fist is recognizeable by it’s playful love of form. Here is a list of titles where she taps out forms: couplets (“what they call paradise”); triplets (“everyone wants to be DuBois,”); quatrains (“dragging sea chests around the bend”); serial-patterned isorhytmic proems (“Oltremare); slightly off internal rhymes (“a faint/shade of smoke”); alliterations (“that our roots are rhizomes”); puns (“I await, unmoored,”); and multi-level wordplay (“multiplicity is what borne the city/ is what borne us, we are still being  /birthed again, and up, and away”).

Another sense of the word ‘telegraphic’ that comes from the world of sports applies to her work.  I am going to end with a riff or two on that because it’s the coolest aspect of Adebe’s very cool style. In sports, they say that you ‘telegraph’ when you unintentionally alert your opponent to your next move–your pitch or your punch or your shot. Bad idea. However, it’s avery good idea ( if you can do it), to fake a telegram,  to set your ‘other’ up to expect you to do a thing, but you shift and pop  in something else. Adebe does that a lot. She sets you up for anger, but gives you love, and more.

For example, this volume’s epigraph is by Franz Fanon whose analysis of the psychopathology of racism led him to conclude that violence must have a role in the struggle of decolonization. In the poem “marron inconnu,” Adebe ‘immortalizes’ Louverture, military emancipator of black slaves in Haiti. In the next poem, the aforementioned “everyone wants to be DuBois,” she writes,” but what about the noise? the sound/ of young black boys/ hitting the ground”. The tension in these elements telegraph the reader to expect a forceful reaction. However, Adebe shifts to a more primal ground than the tension she’s feeling: to love, and beyond that,  to her inquisitiveness about how she and we who share the ‘star-crossed’ enterprise of  cohabiting on this planet connect to each other and to the wholeness of the world:

taut under the moonlight,
and there we are:
lovers,
cross with stars, looking

for a way to read ourselves
into things, into the face
of all this strange,
vast intimacy.