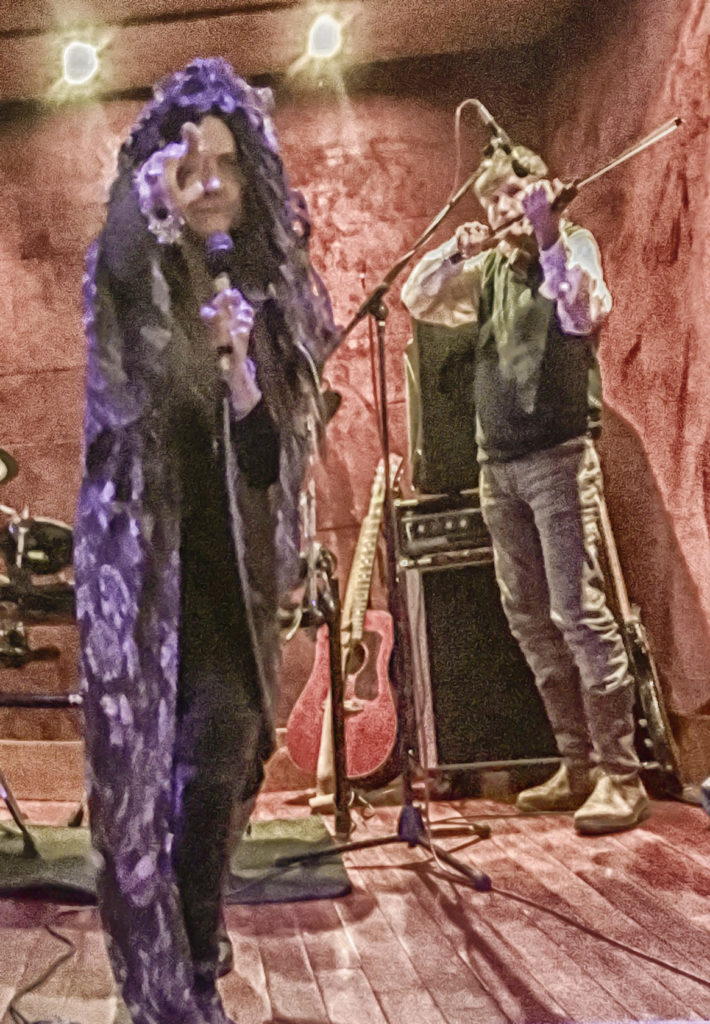 Tidal Fury is a ground-breaking book both in content and form. Presented in the poet’s voice as a series of conversations with and about imaginary figures, her lover/animus, ‘Monsieur’, and her shadow/alter ego/Muse, the poetry is a sumptuous ode to the creative process, its passions and its pain, a seashell echoing the depths of the ocean, words that sometimes drown the poet and on which, at other times, the poet surfs, like Shiva and Shakti, dancing her struggles into life. In one place she asks “Are we forever approaching what we can never give ourselves to?”

The wave rises high “surging into Sunlight/milky green underside/proud. She interacts with “Monsieur” and her alter- ego /shadow muse whose energy is at times abusive, confining, critiquing, demoralizing, the dark muse every writer knows and must endure as her heart breaks and remakes. This old woman walking the sea-wall in black and red conquers competition by derision, a trap we often fall into attempting to shore up self-esteem and which ends up severing our connection to the comradeship we need for support.

From the first page, we see that writing is “continually closing over itself…a sea of Turbulent Words”. Like Clews, we want to be a tidal wave but we withdraw. At other times, like the woman in an indigenous story, we hold the tide-line until our hands bleed. The poet “gluttonizes on words, gorged.”

Words float under my cage…a discourse of signifiers referring to each other [identified only by] their relations to other signifiers, an entire system mediating reality. [Clews sees] veils of words and images drifting over the world.

The sea is everywhere — tidal, storming, spewing up onto the beach flotsam and jetsam  which become Clews’ manna and ours, too, as we walk with her on the sand. Like her, we can constrain or release the tides of creativity. The effort causes hands to bleed: some poems are written in blood. No wonder she says “What terrifies me is my source”. She obsesses about writing “the way I do a lover…words that flow in the symbolic between the imaginal and the real in nights of intense love-making.”

Like Teresa of Avila, whose creativity could only be expressed in spiritual terms, Clews animus/god, ‘Monsieur’, is a literary device known intimately, intimate in closeness and absence, challenging her faith in her own writing. ‘Monsieur’ is a god for all poets, all people , luring, ravishing, abandoning like the god of the mystics. Passion and sensuality are both real and symbolic. C.G. Jung’s female followers have written about the ghostly lover appearing in dreams and disappearing, a quantum phenomena both here and there at once, present in absence, absent when present:

Your writing draws me in, Monsieur, you breathe words into me. I slip under the covers of those words… where poetry is born…only your words massage my breasts, my throat…I toast you, Monsieur, ( you engulf me)…I disappeared into your vastness…lost in you…lost I…two sighs enfolded in each other.

The Muse, on the other hand, is Gorgon, is Medusa.

…she tars my words. Dead eyes watch us. That dead fish at the end of La Dolce Vita. She sent it to silence us…My unbidden, holy muse…a lady of serpents…behind me, cursing…I move quickly…she implodes…I am free.

From Graeco-Roman mythology to the Tarot Deck to Derrida, to meditation leading to nowhere and nothing, the self unravels deep in the grammar of the self, defies coherency, “laws of linguistic construction”. Clews’ poetic form mirrors this, becomes the experience. With her, we are not sure who we are. The poet invites us to break out of time, leave history, dive into silence. “The Ground of Being is no ground at all.” Clews’ brilliant mysticism has found a key: the chasm itself is the arms of God.

Tidal Fury presents profound and perplexing questions about the nature of relationships. “In what ways do we keep each other in check, clipped, chained, trapped.” So many of us have experienced this:

My enunciations formed an uncomfortable anomaly in the grammar of the group. I was not struggling in the way I was meant to meant to…I was ignored. An absent presence. Silence was wielded by those who formed the inner circle, carefully, so my diminishing welcome would not be evident to the others. What happened, Monsieur. Exile.

There is no moon, here, no dolce vita. Unfinished sentences allow us to write the endings, the poet’s monologue to her animus, her muse, us. Like ‘Monsieur,’ we meet her at the edge of the text, its syntax is his absence. We are “bound by a grammar” that shapes our relationship to him. The poet, the text, our inner selves and “when we create a hole in the grammar of connection to others, a speaking voice is silenced”.

This book demands several readings. It is not only Clews’ story but ours whether we are poets or not. We surf the tides, falling and rising. And we are the absent moon.

Weaves of words flow over the world…shoals of words, tides, of words, flowing through our consciousnesses…The language that shapes us…inseparable from time…organizes us into communal cohesion.