Posted on November 7, 2012 by Stanley Fefferman 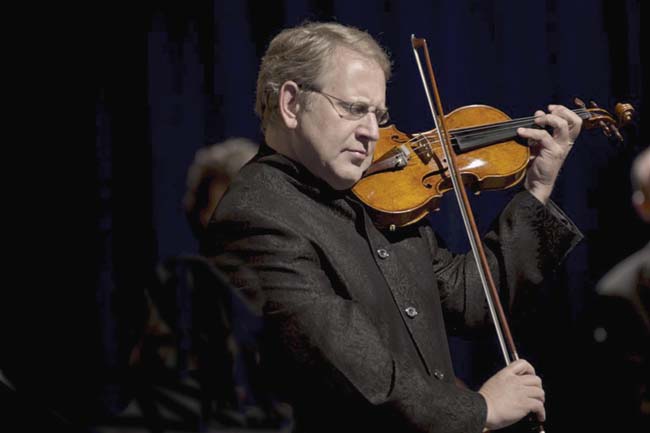 Ontario Philharmonic, under the baton of Marco Parisotto, made the opening bars of  Tchaikovsky’s Violin Concerto roll a thunder of timpani through Koerner hall. In the suspended hush that followed, virtuoso violinist Shlomo Mintz made his first entry.  He shaped Tchaikovsky’s familiar melody with a flip of hesitation that made my heart skip a beat.

Mintz’s musical thinking is instinctive. His tone, aged for 50 years on the concert stage, is rich and gritty. He bows with a firm hand, strokes bold as charcoal, his face set in a concentrated scowl that dissolves into a smile when he cues the conductor to merge the orchestra with him. In rhythmic passages, Mintz taps the heels of his Guccis. This is a heart-on-sleeve performance, fierce and emotional, not especially gentle, more energetic, masculine, athletic. Mintz makes the first movement cadenza, peppered with perilous double-stops, unabashedly whine, whistle and groan on its way to a gently trilling reunion with the whole orchestra. There were moments when the exquisite acoustics of Koerner hall lured both the unsuspecting soloist and orchestra  into sonic zones of shrill and harsh.

I enjoyed the interplay of soloist and winds throughout the Canzonetta, inflected with traces of Gypsy and Klesmer flavours, despite the second theme’s wandering into the nostalgic. The excellent orchestral wind soloists also adorned the Finale, especially their echo of the second breathtaking violin solo. Maestro Parisotto’s control of his forces made a pandemonium of orchestral colours  rise up to frame Mintz’s spectacular gallop towards a finish that brought the audience to its feet.

His encore, Fritz Kreisler’s  Recitativo and Scherzo-Caprice for Solo Violin, Op. 6 (1911),  elegant, musical and pure, was without a trace of showiness or sentiment.

Clarinets, bassoons, and low strings create powerful rhythms of the somber  motif that opens Tchaikovsky’s Fifth Symphony and walks in its darkness through every movement. Maestro Parisotto takes the Andante bit slow, plays it a bit loud, but generally goes gently and lyrically into the lovely dark quiet that ends the Allegro.

In the second movement, with four changes of tempo skillfully managed, the motif popularized as “Moon Love” by Glenn Miller, Sinatra and others in the ’40’s, and as “Annie’s Song,” John Denver’s number one hit in the 70’s, begins as a lovely (but not tunefully played at every turn) horn melody. It meanders into a heart-breaking dialogue with the oboe, amps up brutally in the brass, and finally subsides in the clarinet, its first yearning glow chastened.

The motto, sometimes known by the ominous moniker “Fate,” insinuates its shadow into the concluding bars of the brief, distractingly naive Valse Allegro. Maestro Parisotto and the Orchestra let the motto swell to convincing majesty in the Finale that rushes ‘presto’, with abandon, towards a conclusion that is triumphant, but tinged by doubt. After a lifetime of listening, Tchaikovsky’s Fifth still awakens my heart.

The Ontario Philharmonic, despite its name, is no way a provincial orchestra but a fine music-making instrument. Directed by Marco Parisotta, this Philharmonic is offering a series of three concerts at Koerner Hall this season. The second one is due on Dec. 4, an all-Brahms programme featuring piano soloist Anton Kuerti.