Posted on November 4, 2012 by Stanley Fefferman 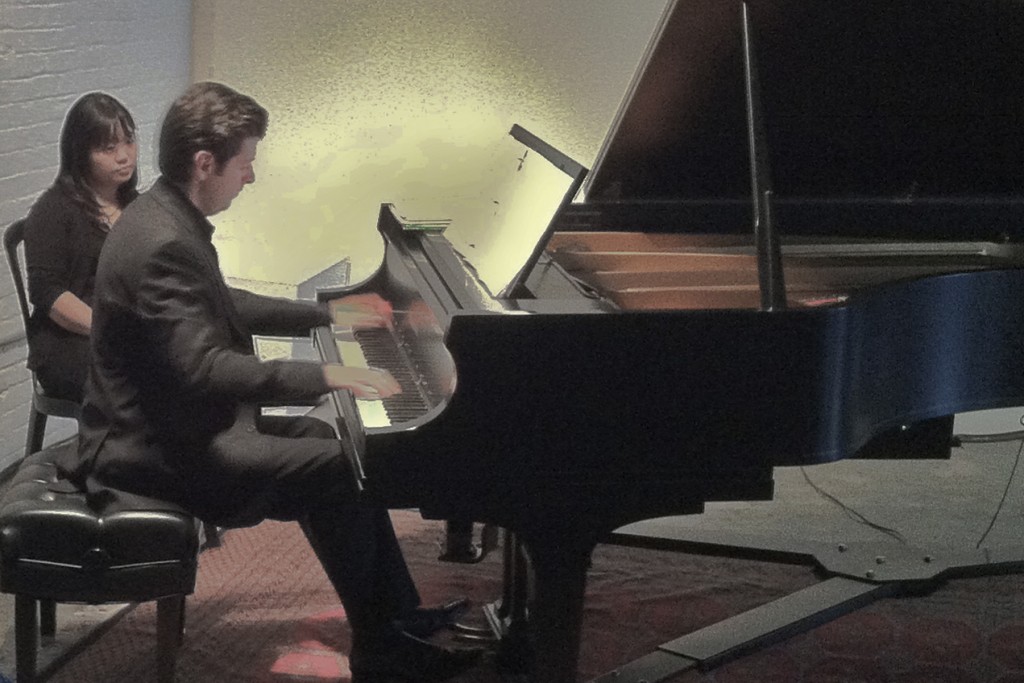 This is a two-headed story. One head is Darrett Zusko (1984- ), a twenty-something pianist, praised by his teacher at Julliard as “the most technically-gifted pianist I have taught in 30 years.” I’ve heard Mr. Zuzko in recital twice since 2009, playing really difficult music: Liszt Etudes, Schumann’s Fantasy in C, a Bartok Suite, a Sonata by Scriabin, and playing them very well.

The other story is Nikolai Kapustin (1937- ). Like Horowitz, Gilels, and Richter, he graduated from the Moscow Conservatory as a virtuoso pianist. Kapustin’s composition output exceeds 100 opuses, consisting of sonatas, concertos, preludes, fugues, nocturnes, and so on. His Twenty-four Preludes and Fugues, Op. 82, written in 1997 have been compared to Bach’s Well-Tempered Clavier. Kapustin is quoted as saying that the single most influential figure on his music is Canadian jazz legend Oscar Peterson.

This afternoon, Darrett Zusko totally rocked a select audience at Toronto’s première piano salon—Gallery 345, with a selection of Kapustin’s compositions for solo piano. Here’s where the two heads of this story come together. Kapustin writes in classical forms with performance annotations down to the minutest detail, but his musical language is traditional American Jazz—the language of James P. Johnson, Fats Waller, Art Tatum, Errol Garner, Dave Brubek, McCoy Tyner and Keith Jarrett.

Zusko dove into Kapustin’s work without much experience in the jazz idiom and made it sing and (mostly) swing. Because I love Kapustin’s music and trusted Zusko’s classical chops, I decided to take the afternoon off from reviewing, and just listen. What a treat it was. I enjoyed the music so much, I couldn’t help myself, but had to sit down for an hour before dinner and scribble this little two-headed story.

Footnote: Kapustin’s began his musical career touring the Soviet Union playing piano in jazz bands. Later he recorded his own music for the Triton label, now only available in Japan. Recently the West is discovering Kapustin: John Salmon recorded some things on Naxos. Marc-André Hamelin and John Osborne recently made recordings on Hyperion.

Darrett Zusko, a much sought-after concert soloist needs to get his Kapustin repertoire together, take it on the road, and make his fans very happy.