Posted on November 12, 2012 by Stanley Fefferman 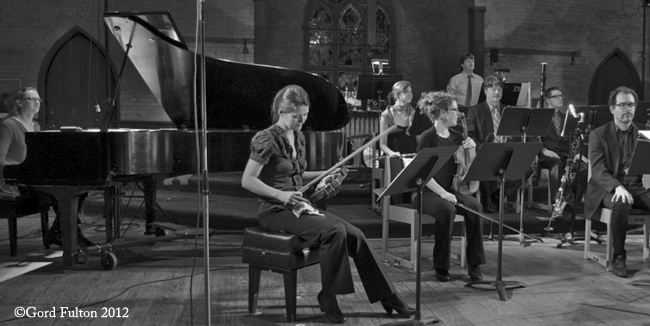 Each year since 2000, ECM+(Ensemble Contemporain De Montréal) and its artistic director Véronique Lacroix have invited young Canadian composers to a juried competition of the Génération Project. The four winners spend months in a residency/workshop program to prepare their music for the cross-Canada tour that will start their careers ‘with a bang’. Audience ballots decide the tour’s winner who receives a cash prize and a commission to be performed next season.

Gabriel Dharmoo (1981) of Québec was inspired by his studies in South Indian Carnatic music with N. Govindarajan. His Ninaivanjali (2012) is a complex blend of  melodic threads, rhythmic and traditional drone elements mixed with Western and Avante-garde effects. Melodies in the strings blend with fluid bassoon extrusions, high-pitched tink of piano, bells, glassine violin passages and various extended techniques that produce clicks, clucks, boinks, tones of bagpipe and organs. This is a warm, emotional work, cheerful, too, in its imaginative play.

After intermission, the source of inspiration moved from India to Estonia with Beatitude for solo violin and ensemble by Riho Esko Maimets (1988). This unhurried piece reflects the composer’s fascination with the long  lines of Estonian choral music and the consolation for human suffering to be found in such music and in biblical expressions of comfort for ‘those that mourn.’ The leisurely melodies of Mr. Maimets’ work are made of atonal, repetitive units, some resembling Hare Krishna chants, with a four-note Hebraic lament in the violin that rises to painful intensity then dissolves into the sussura of tidal white noise. The middle section jigs and chugs along a boisterous, toe-tapping medieval passage and returns in the finale to the mood of serial lamentation. Soloist Véronique Mathieu plays from her body, beautifully. This is the work I voted for.

The final work was the feistiest. Jenny’s last rock  for 5 tape recorders and ensemble (2012) by Annesley Black of Ottawa and Frankfurt is inspired by the Canadian sport of curling and its current reigning queen Jennifer Jones. Tape recordings of curling events—the swish of brooms, the click of stones, the voices of fans, and interviews with a retired curler— are played and manipulated from  cassettes in the hands of otherwise occupied musicians who introduce them at regular intervals in the score. Ms. Annesley’s music rides the eccentric crescendos and acclerandos of a looney-toons collection of sound effects that make sense of the intriguing chaos it generates.This was the cheekiest and most good-humoured work of the evening.

My final comment: Forrest Gump, box of chocolates, never know what you’re going to find, all good, not every piece to your taste, the long run is exciting. Thank you ECM+Véronique Lacroix, and Robert Aitken’s New Music Concerts for keeping this Génération Project happening. And thanks to composer writer Nicholas Gilbert for a witty and genial job of hosting.