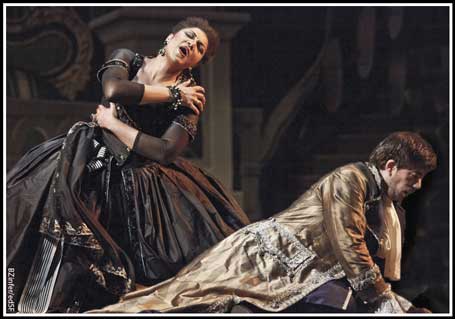 “Nature never set forth the earth in so rich tapestry as divers poets have done; her world is brazen, the poets only deliver a golden.”  Sir Philip Sidney

If you found out that your best friend and the woman who expected to be your bride had became lovers and brazenly plotted to assassinate you, naturally you would want them caught and punished. But in Mozart’s golden (and final) opera, the plotters confess, are pardoned, and you thank them for helping you to rise above your instincts. Imagine!

Opera Atelier’s co-artistic directors, Marshall Pynkoski and Jeannette  Lajeunesse Zingg did imagine a production that delivers a world of pure golden delight. Their players have amazing voices, are good looking, gorgeously costumed, enchantingly set, lit, and ornamented by a ravishing corps de ballet. It goes without saying there’s nothing wrong with Mozart’s music, and for a baroque ensemble and chorus, Tafelmusik, conducted by David Fallis can’t be beat. Given all this gloriousness, one can also see at a glance that it is the directorial vision that galvanizes all these excellent-in-themselves elements into the exciting experience of a work that has rarely been staged in the past 150 years.

Jean-Pierre Ponnelle’s 1969 production for the Cologne Opera, began the restoration of La Clemenza’s reputation, and Christopher Alden’s 2009 production for the Chicago Opera Theater conducted by Jane Glover kick-started a reassessment of this supposedly fizzed out, two-dimensional “opera-seria.” The Opera Atelier directors took the risk of producing this long-shot, and found their saving grace in Racine’s Berenice, where the characters come to life because they face and accept the flow that follows a difficult decision rather than escaping disappointment by dying. Instead of taking the brittle positions passions corner them in when events turn, the characters turn with events, accepting the demands of changing circumstances, forgiving each other’s weaknesses.

Of course, it still seems a bit absurd that Tito would propose marriage to three women in one day, and that none of the fatal miscalculations of the disappointed parties are punished. But somehow, the tremendous style that unifies every detail of what happens on stage, and how it flows with the music, releases any pent-up absurdity the audience might feel in a catharsis of enjoyment.

Measha Brueggergosman as Vitellia, the twice-spurned empress-candidate is a feral presence on the stage as she unleashes the force of her jealous ambition on Sesto, her all-too-willing instrument. Her part in the trio “Vengo, aspettate” is magnificently three-dimensional as her voice and demeanour radiate confusion and horror that Publius and Annius are able to misinterpret as excited happiness over the news that Tito has finally chosen her as Empress. On a simpler level, the duet “Ah perdona al primo affetto” in which Servillio and Annio affirm their tie of love in defiance of Tito’s matrimonial interest in Servillio is the first of several lyric joys as  the trousered Mireille Lebel blends her stalwart mezzo with Mireille Asselin’s sweet soprano.

Michael Maniaci as Sesto is electrifying. His “Parto, ma tu ben mio” and “Deh per questo istante solo” are deeply moving. His male soprano seems to rise to the top of any scene he is in, and his movements as an actor are sharply compelling, if a bit tightly wound. Kresimir Spicer and Curtis Sullivan respectively, as Tito and the courtier Publius, are both in fine voice, blending much needed male tones into the predominantly soprano texture of the soundstage. Spicer’s “Se all’impero, amici Dei” is richly drawn.

Tafelmusik Baroque Orchestra and Choir keep the magic of Mozart’s music flowing like a river on which the voices float. Peter Shackleton’s clarinet obbligato transports us to the exquisite pleasures of the Concerto and the Quintet for Clarinet. John Aberger’s oboe obligato is another bonus passage. At any and all points, the elegant patterned movements of the dancers are a bonus. Speaking of movements, the one fault I find in the direction is that it all-too-often sends the lead characters crashing full-tilt into the side pillars.

If, as they say, opera seria is an acquired taste, Opera Atelier’s production of Mozart’s Clemenza would be the place to acquire it. It runs to May 1. Click here for times and tickets.