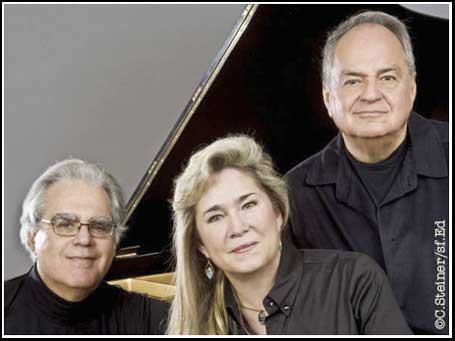 There is a life-affirming energy in Brahm’s Trio in A minor for Piano, Clarinet and Cello, Op. 114. Brahms, in his 57th year, had decided never to compose again. By chance, he attended a recital by clarinetist Richard Mühlfeld.  Brahms’ decision to stop creating music was blown away by this performance and, over the next few years, he composed for Mülhfeld this trio, a clarinet quintet, and two clarinet sonatas.

The cello introduces the sombre, arching theme of the Allegro. ARC’s clarinetist Joaquin Valedpeñas paired delightfully this evening with guest cellist Sharon Robinson. As if James Taylor were paired with Janis Joplin, the clarinet answers the cello’s opening gritty, gutty emotion with delicacy—deep, warm and sweet. The clarinet makes elegant work of the recapitulation and the cello joins for a whispered rush to the movement’s end. Dianne Werner took some time toning down the volume of her keyboard and by the middle of the Adagio movement she began fitting in. In this movement, clarinet matched rather than mollified the cello’s emotion, a feeling that developed into a kind of love-story line by the third movement, and finished as a dark dance in the forceful Allegro finale.

The most exciting composition of the evening was the Suite for Two Violins, Cello and Piano Left Hand, Op. 23 by Erich Korngold. The Prelude and Fugue opens with a discordant cadenza for solo piano dramatically played by ARC’s David Louie. The anxious, chromatic melodies of the fugue voiced by the three strings create an eerie impression that rises to rapture in piano trills, lapses into silence, rolls out in the lower registers of Bryan Epperson’s cello, and resolves in deep piano chords punctuated by cello pizzicatos. Erica Raum and Marie Bérard have a lovely high-toned violin conversation before the cello brings the movement to a fully committed emotional close.

The Waltz is spooky, mixing the atmospheres of Vienna with a sinister, tango-laden Argentinian brothel. The Grotesque (3rd movement) is percussive, abrupt, jerky and obviously fun for the musicians. The piano ushers in a creepy mood, the strings follow, the mood turns sentimental in a piano solo that opens into a wide screen movie score by the whole ensemble that concludes in a rousing climax. The fourth movement is a song that has a Mozartian loveliness touched by the rich tones of a of a Mahler soundscape. The Rondo-Finale gallops away like a horse opera, reminding us that Korngold made his living writing some of the best scores Hollywood ever heard.

The featured Kalichstein-Laredo-Robinson Trio came onstage after intermission for Schumann’s Piano Quartet in E-flat major, Op. 47, joined by ARC violist Steven Dann. The members of the K-L-R Trio have been together for 35 years, and it did not take long to hear their smooth drive taking every turn of the Schumann perfectly. The Introduction—a delicate tutti—ignited quietly like a Rolls Royce. The pianist Kalickstein rolled out a rhythmically incisive second repetition of the opening theme, but was meticulous in keeping his keyboard in sonic balance a bit below the string tone. Steven Dann’s viola fit in seamlessly until after the midpoint of the Andante Cantabile third movement, where it sings the original melody nicely solo and in concert with the cello. The viola also features strongly in the fugue of the exuberant Finale. The cello and piano  introduce an intricate staccato line that moves Schumann’s final chamber work and a life-affirming musical evening, in a contrapuntal flow towards a climactic finish.

ARC is the acronym for Artists of the Royal Conservatory