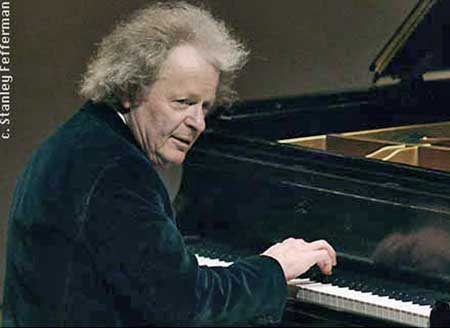 Anton Kuerti’s 2006 recording of the Brahms Concerto for Piano no 1 in D minor, Op. 15 for Analekta with  Joseph Rescigno conducting the  Grand Montreal Metropolitan Orchestra is ranked highly among world-class recordings. Kuerti’s playing is exceptional. He is imaginative but never showy; he takes chances but is never wayward. His range of tone and dynamic is wide and there is a sureness to the emotional thrust of his playing.

The piano enters after a very long, tumultuous opening orchestral tutti which is supposed to be a vigorous onslaught. And it was, though the tempo seemed to drag at first. Maestro Marco Parisotto leading the Ontario Philharmonic may have misjudged the acoustics of Koerner Hall, because the sound, particularly of the timpani and brass, seemed mindlessly shattering. Nonetheless, the warmth and intelligence of Kuerti’s playing prevailed, and the first movement ended on a feeling of celebration.

The Adagio worked better with the orchestra keeping behind Kuerti’s sweet, spacey, otherworldly reflectiveness. The winds occasionally overwhelmed the piano, but on the whole contributed some very nice colours to the introspective mood. The Finale was crisp and cohesive. Kuerti’s light-fingered virtuosity was balanced forward in the rollicking soundscape of Brahms’ rondo with its nods to Beethoven and Schumann. The ever-strident brass introduced Kuerti’s masterful cadenza that twisted and turned like a wily fox and led the ensemble in its dash to the victorious finish.

Brahms was 20 something when he wrote the Concerto in D minor.  He was in the midst of deep emotion concerning the madness and death of his mentor Schumann and caring for Schumann’s wife Clara and her family. Brahms started his first Symphony in his early 30’s and was well into his 40’s when he completed it, partly because of the burden of expectation from his friends and public that he would be Beethoven’s successor. The Symphony No.1 in C minor, Op. 68 is the product of a great deal of pressure and much deliberation. It was a success. It is also huge, lasting up to 50 minutes.

Maestro Parisotto, to his credit, conducted without a score, radiating musicality in the flow and precision of his gestures. The performance of the orchestra was a mixture of blessings: good timing, some passages of great textural beauty, and some roughness in dynamics. In general the climate of the first movement was limpid and clear. I enjoyed the lyric winds in the third movement, especially the clarinet, as well as the songfulness of the first violin. The opening of the last movement was dramatically executed and progressed in a fully voluminous way and measured pace towards the coda, and the tumultuous applause of a satisfied audience.