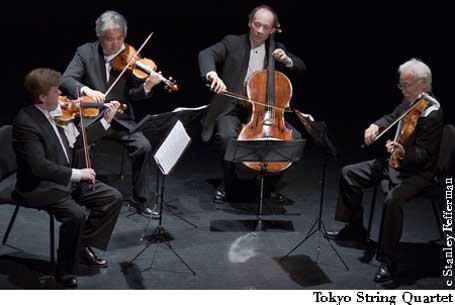 “Whoever has built a new Heaven has found the strength for it only in his own Hell.” Friedrick Neitzsche”.

Beethoven composed his last three string quartets within a few years of his death from prolonged, painful, multiple organ dysfunctions due to poisoning by the lead additives in the wine he habitually drank.  These quartets are the music Beethoven wrestled from the grip of his Final Angel. Where other ensembles bring out the drama of Beethoven’s defiance as he meets the inexorable gaze of fate, the Tokyo String Quartet create an effect like Leonardo’s Mona Lisa, where rich feeling radiates from the depths of an enigma so at peace with itself that it can show a smile.

The A minor, Op. 132 (July, 1825) sings at its core in an archaic hymnal mode giving thanks for new strength after the recent bout of illness Beethoven had endured; but the song of thanks also intones a profound, somewhat mournful resignation. Part of the enigma of this work is the constant start-and-stop alternation of happy and sad, quick and slow, flowing and staccato, solemn and dance-like, soft and loud. It’s as if whatever feeling absorbs Beethoven in one moment calls up out of the depths its opposite, be it harmonious or dissonant. A low register drone like bagpipes evokes in the first violin a high pitched passage that sounds like “Chopsticks.”

Another part of the enigma is a sense that the music “teases us out of thought.” We are reminded of the music of the future. One hears passages whose figurations bring to mind music of later Romantic composers, be it Brahms, Tchaikovsky, Borodin, Rachmaninoff, Copeland or Gershwin:as if Beethoven had found the musical archetypes, a musical table of elements, for states of mind that have persisted to this day. Since I don’t recall noticing this effect until this performance by the Tokyo String Quartet, I have to allow that it is a reflection of the distinctive polish of their playing.

The C Sharp Minor, Op. 131 (July, 1826) in seven movements, may be ‘the greatest quartet ever written’.  It was composed during the time that the composer’s nephew Karl, whom he regarded as a son, attempted suicide, and whom Beethoven saved by getting Karl accepted in a patron’s regiment.  It opens with a fugue that looks back to Bach. The four parts of the fugue are based on a melody in which one can hear “The still, sad music of humanity”. A fast movement follows powered by the flying fingers of Martin Beaver on the first violin and Clive Greensmith’s cello plucked pizzicato like heartstrings. The flow is often agitated but the spirit of this movement is  warm with Beethoven’s sense of freedom to do as he likes.

Richard Wagner referred the central andante—’theme and variations’—as the “incarnation of innocence.” The theme is simple, the scoring is uncannily skillful. Kikuei Ikeda’s second violin’s support of Beaver’s melodic phrases are subtle, while the first violin remains silent during Ikeda’s melodic turns . Kazuhide Isomura’s viola creates a fine contrast of long notes against the cello’s air-spaced pizzicati, and their double-stopped duets that follow are especially fine. The Tokyo give this movement an organ-toned, smooth, melting, texture shot through with the skylarkings of sonic highlights.

A playful presto followed by a mournful adagio brings on the martial finale that, again in the words of Wagner, “is the fury of the world’s dance…and above the tumult, the indomitable fiddler whirls us to the abyss.” The Tokyo abandon themselves to a craziness that dances with lamentation and prayer.

Beethoven’s last complete work for string quartet, the F major, Op. 135 returns to an earlier style of composing. It is in the conventional four movements and is quite short—in Beethoven’s own words, “a circumcised quartet.” Though his health was precarious, and he was very short of cash, the work is cheerful in a Haydnesque way. In the score of the finale, Beethoven inscribes the idea around which his work last work revolves: “Must it be? It must be.” The movement begins with a question posed with slow, sad music: the music of the final answer is ‘glittering and gay.’