Posted on April 8, 2011 by Stanley Fefferman 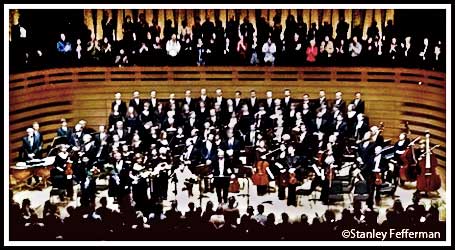 What a win Tafelmusik racked up last night with their debut performance of Beethoven’s 9th! The hum of the closing chords from the Baroque Orchestra, Choir and soloists, still hung in the air as the audience roared to its feet: it was like the Leafs had taken the Stanley Cup.

Setting aside partisan politics of period-instrument vs. modern orchestra, if you could hear Jean Lamon’s violin introducing the opening theme with the clarity of birdsong in spring, and hear the orchestra follow with a dynamic surge that brings to mind the chthonic earth energy of Stravinky’s Rite of Spring, well, to mix metaphors, you’d know you were at a feast of Beethoven and in for a whole new palate of flavours.

The timpani is pointed and explosive. The flute comes to prominence as a silver thread. The architecture is cleanly articulated, builds less as flow and more as percussive steps showing Beethoven rooted in the Classical tradition of Haydn and Mozart. The parts of the orchestra come sharply to prominence with crisp edges while the orchestra as a whole navigates the dynamic hairpins of the score on eight cylinders and manages to maintain just the right momentum.

At some point one notices that maestro Bruno Weil never moves his feet. He keeps them at shoulder width, supporting his weight and that of the whole orchestra from a martial-arts stance that seems grounded deep in the earth. Despite the vibrato-less strings, the adagio creates a sublime feeling of repose that is beyond gorgeous. The choral singing is excellent, the solo work by Sigrid Plundrich, Anita Krause, Rufus Müller and Christòpheren Nomura was impressive and  well balanced with the instruments. The finale with its powerfully phrased trombone episode has a right sense of grandeur. The concluding choral apotheosis recalls the earth-energy explosion that ushered in the first movement, but here the choral element, the instruments with human faces, move one towards the life-affirming celebration of Orff’s Carmina Burana.

Tafelmusik Chamber Choir directed by Ivars Taurins performed a cappella for the first half of the program. Their sound exhibits the finely-grained textures and articulated wave patterns that you find under the silken finish of old italian violins. I don’t know how it happens that their Mendelssohn’s Ehre sie Gott in der Höhe (1846) brought to mind the energy of Leonard Cohen’s “Who by Fire?” The Missa canonica, WoO 18 (1856/7) by Brahms created a gentle, psychedelic radiance. Arvo Pärt’s Nunc dimittis (2001) is a chromatic arrangement of cubistically narrowed, flattened tones with some luminous soprano parts. The excellence of the Choir tuned the audience up to the right pitch to begin receiving the Full Beethoven.

Tafelmusik performances of this program continue at Koerner Hall through to the matinee on Sunday, April, 10. All performances are currently sold out.  Let’s wait for the CD.