Posted on April 6, 2011 by Stanley Fefferman 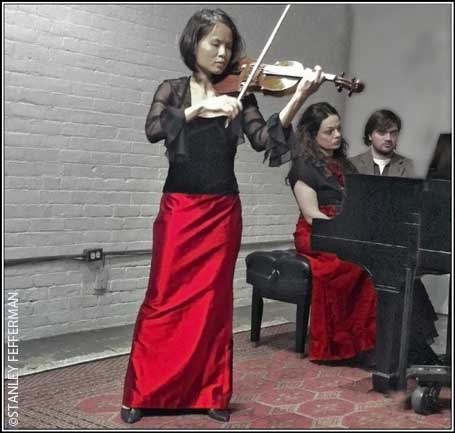 Mozart’s Six Variations in G minor on ‘Hélas, j’ai perdu mon amant’, K. 360 is the song of a ‘jiltee’. The melody, borrowed from a French source, is a little obsessive, like the refrain from “The Miller of Dee” ( ‘I care for nobody, not I, and nobody cares for me.’), and Mozart’s brokenhearted variations replay themselves in the mind long after the instruments are silent. Mlles. Kuo and Humetska begin by dragging the tempo a bit, but by the 5th variation, tempo and touch on the piano are nice, and the violin part is flowing.

César Franck’s only violin sonata (in A major)—1886—makes considerable demands on both violinist and pianist as the composer takes the cyclic theme from moods of dreamy, floaty fantasy through a lot of stormy weather, towards a sweet and saucy, sexy conclusion. I liked Humetska’s rolling storms and Kuo’s total commitment to the music as she builds towards the Allegretto Poco Mosso’s final climax. That Franck gave his sonata to the Belgian violinist Eugène Ysaye as a wedding gift makes humorous sense.

Nino Rota (famous on this side of the Atlantic for the Godfather film music) is said to have based his Improvviso in re minore on the story of a brutal murder. Staccato and glissando passages, tipsy, gypsy, crazy rhythms suggest a mind sliding off the edge of sanity into the madness of love. Astor Piazzolla’s brief (3:40) Milonga en re that followed shifts the mood to the smooth and sensuous moves of the tango. Humetska’s intonation and touch progress ‘ostinato’ at a tangent to the story the violin is telling, making the scene like a dimly lit street rolling out behind a pair of lovers, arm-in-arm, strolling home.

I never expected a made-in-Russia arrangement of Gershwin melodies to raise the roof in a classical concert, but that’s what happened. Igor Frolov’s (b.1937) Concert Fantasy on Themes from Gershwin’s Porgy and Bess, Op. 19, for violin and piano,(1991) seemed to free the duo from their classical corsets and got the joint jumping. Maybe it was Lynn Kuo’s banjo sounding pizzicato on “I’ve Got Plenty of Nothing,” or Marianna’s bluesy “Summertime” riffs that made this part of the concert take off into the blue. But there it went. Or maybe it was the complete relaxation into love of “Porgy, I’s yo’ woman now.” That too. Whatever the cause of the elation that came into the room towards the end of last night’s concert, here’s a quote from Nino Rota to go out on:”I’d do everything I could to give everyone a moment of happiness. That’s what’s at the heart of my music.”