Music in the Afternoon Presents Adrienne Pieczonka with Stephen Ralls in Recital: Review by Stanley Fefferman

Posted on December 1, 2011 by Stanley Fefferman 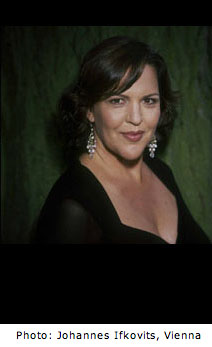 A rare opportunity, this Music in the Afternoon recital is, where we hear a major Diva sing in a small room, accompanied on the piano by Aldeburgh Connection’s Stephen Ralls who has made recital appearances with Sir Peter Pears, and worked with Benjamin Britten.

The Diva is soprano Adrienne Pieczonka, currently the opera world’s toast for her roles as Strauss’ Senta, Wagner’s Siegelinde, and Verdi’s Tosca, the role she will sing this Canadian Opera Company’s season.

Listening to the operatic arias on the program was like sharing the stage with Aida, torn between her love for her father, her country, and her lover, Radames. As Radames prepares to battle her kin and country, Aida sings to him “Ritorna vincitor” / “Return a conqueror.” Passion and pathos ride together on Pieczonka’s gleaming voice, soft and supple, soaring in the high notes, surely expressing Aida’s sensual vulnerability (for the first time in a recital).

The other arias fill in a gallery of  women torn by love. Pieczonka’s portrait of Elvira from Verdi’s Hernani ( a new direction for her_ is gorgeously shaped in tones richly chiaroscuro as she utters what amounts to a curse: “Surta e la note”—”The night is risen, and Silva doesn’t come back! If only he never came back this hated old man…”

When she becomes Tchaikovsky’s Tatanya ( her career debut role) baring her soul in a love letter to Onegin, Pieczonka’s voice shimmers with the coloured lights of a prism, her powerful instrument finely timbred to express a personality subdued by the irresistible mystery of a fatal passion.

The effect of her voice is almost narcotic as it rises like a the flower-scented breeze above Halls’ somnolent piano during “Phidyle,” the first of four songs by Henri Duparc. The accompaniment of “Le Manoir de Rosamunde” is reckless, urgent as a  hunt through darkened woods, and Ms. Pieczonka’s character is by turns savage and sad as she sings,”Love, like a dog, has bitten me.” The concluding pair of songs are solemn, poignant, as she mirrors the regret of a character, perhaps the composer himself, who lived most of his later years paralyzed and blind.

Deceit, Lechery, and Jealousy are among the themes of the John Geer’s song cycle Allegory of Desire that Ms. Pieczonka recorded with Mr. Ralls in 2008. Fortunately, these lovely translations into English of ancient Greek poems conclude with affirming titles such as “Time Reveals, Time Heals.”