Posted on December 1, 2011 by Stanley Fefferman 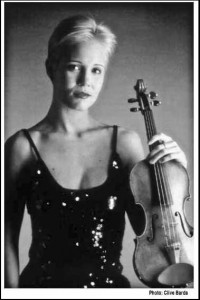 The disposition of Stravinsky’s Violin Concerto is often antic—shifting tempi, tone and timbre without warning.  Its angular lines dance, hectic and corybantic, lurching in irregular metres, taking long, grinning glissando slides spotlighted by ironic trumpets’ blare. Leila Josefowicz, endowed with her well-known sense of adventure and virtuosic command, was inspired by this difficult score: she fiddled with urgency and expression, as guest conductor Andrey Boreyko lit a fire under the Toronto Symphony Orchestra.

Ms. Josefowicz’s  tone is bright, silky, soaring with a smooth legato, her range of colours wide and well-chosen, as appropriate to the light-footed opening “Toccata” as to the slow “Aria” where her ardour melts into the underlying Olympian pulse.

This concerto (in four movements) makes some homage to Bach with whom Stavinsky’s native wit, elegance, charm and animal energy are clearly compatible. The musical dialogue lurches in irregular meters between soloist and orchestra. Ms. Josefowicz got into the humour of that with enthusiasm, sharing the limelight with the responsive playing Maestro Boreyko commanded from the Toronto Symphony Orchestra.

Prokofiev’s Symphony No. 5, Op.100 (1944), like many works composed in the USSR during Stalin’s time, seems to sing two songs. One song proclaims the victorious energy of the Soviets. The other bears witness to Soviet oppression. Prokofiev wrote an in his mandatory introduction: “I conceived [the Fifth] as a symphony of the greatness of the human spirit.”

Following its triumphant premiere, people assumed that the Fifth symbolized ‘world-war agony and triumph’—the counterpart of Shostakovich’s 1941 “Leningrad” Symphony. But the music is ambiguous, singing two songs. One song line comes right out of Prokofiev’s recent opera Cinderella. However the lovely, long melodic lines of the first movement are rarely allowed to soar freely. Almost invariably they are dragged under by a deep undertow of an ominous counter-melody.

Maestro Boreyko doesn’t take sides. He defines an inclusive architecture allowing  details and the emerging images to speak for themselves during this lively reading. The allegro marcato  is a boisterous balletic barrel of variations. A danse macabre song section is succeded by a fleeting trio in waltz-time borrowed from Cinderella.

The adagio, recalling Prokofiev’s ballet Romeo and Juliet intensifies from a solemn procession into a grim funeral march with martial overtones that abate in airy whispers. The finale is allegro giocoso, in lively mood of that same ballet.  A syncopated theme announced by the clarinet returns throughout the rondo-like movement, until a tour-de-force coda ends it with what one writer described as the ‘attack of the automatons.”