Posted on December 2, 2011 by Stanley Fefferman 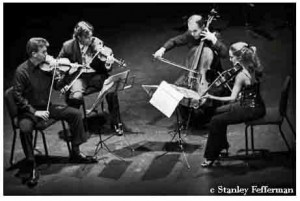 This is a newsworthy concert. The foremost item is the first Toronto performance of a new work, Kohelet, by Argentinian composer Osvaldo Golijov, the second quartet that he has written specifically for the St. Lawrence Quartet (The first was the double Grammy nominated Yiddishbbuk (2003) —inspired by a collection of apocryphal psalms that survive only in the notebooks of Franz Kafka). 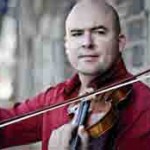 The second news item is that for the second time , violinist Geoff Nuttal is on paternity leave from a Music Toronto concert. Good luck. Filling his fiery chair is Mark Fewer, a Newfie fiddler now out of Montreal, well-known for his dynamism and virtuosity. Fewer will remain in his chair as the Quartet continues its tour in the US.

Beethoven’s Quartet in A Op. 18, No. 5 is said to be modeled on Mozart’s quartet ( K. 464) in the same key. Mindful of Mozart’s supremacy in blending character and music, you can hear in Beethoven’s work the cadences of a highly ornamented melody telling a story for musical theatre satirizing the encounter of worldly doom that stalks a naïve youth. The St. Lawrence’s narrative is refreshingly direct and simple.

The darkish emotionality of the poignant second movement menuetto sings sweetly, rocking in a sedate rhythm. The theme and variations of the  restrained ‘pastoral’ third moving andante cantabile express  a kind of homesick heart that looks ahead to Schubert. The ensemble makes the most of the contrasting formal, mystical, and robust variations. The finale opens with a carefree four-note motto that recurs, sometimes nervous and agitated, but dies away singing a charming farewell motif.

Kohelet (the Hebrew word for the biblical book familiar as Ecclesiastes)  is currently a two-movement work expecting to grow. When the St. Lawrence premiered it in Philadelphia last  month, it was, in composer Golijov’s own words, “far from finished.” Both of its movements are held together by Franz Schubert  melodies slowed down and “stretched to the breaking point.”

The initial movement begins with a bizarre duet of first violin and ensemble. The ensemble makes minimalist ostinato repetitions of rhythmic structures that bring to mind the lines of the biblical text:”What has been will be again, / what has been done will be done again. ”

All the while, Scott St. John, sitting in the first violin’s chair, lets the long-held notes of the main melodic line soar up into space as, to paraphrase Golijov’s own analogy, the mind floats in freedom above the din of an off-road motor-bike. To this image of the music these words of  the preacher might apply: “You who are young, be happy while you are young, / and let your heart give you joy in the days of your youth.”

The harmonies of the second and still slowed Schubertian-themed movement are colourful, evanescent, with an elusive beauty faintly marked by dissonant lines that  might be thought to trace Kohelet’s motto — “Vanity of vanities, all is vanity.”

Because of its melancholy core, Schubert’s final String Quartet in G. Major, D. 887 can suffer from leaden tempos. The first movement is very slow, as is the second. An undue emphasis by some interpreters on the gravitas and intelligence in the score, can rein in the flow of Schubert’s music, obscuring the playfulness and innocence that accompany its deepest moments. Trust the St. Lawrence to bring classical energy and athleticism to their performance.

The St. Lawrence’s phrasing of Schubert’s bold variations produce broadly sculptured passages, voluminous spaces. The plaintive theme of the opening allegro, though sad, contains a guileless strength and determination that steers the mood away from melancholy. The movement’s minor/major changes work out towards a resolution that mingles sadness with gaiety, as in these lines from Yeats’ “Lapis Lazuli”:”On all the tragic scene they stare./ One asks for mournful melodies;/Accomplished fingers begin to play./Their eyes mid many wrinkles, their eyes,/Their ancient, glittering eyes, are gay”.

The exquisite ‘niggunlike’ melody that opens the slow movement, and the lighthearted children’s skipping game theme of the scherzo, are like masses of bright colours outlined in strong, dark strokes by the cello. The final allegro,  recalls some of the ambiguous major/minor exchanges of the first movement but with the sense of drama heightened by sharp accents and powerful rhythms. It’s good news at the closing when this drama resolves in a dance rhythm that recalls the courtly, comedic world of Mozart.