Posted on December 3, 2011 by Stanley Fefferman 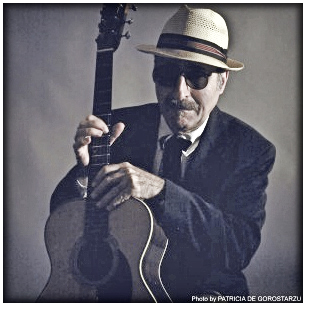 Leon Redbone has rakish good looks, like my dad, and the songs he sings were hits before my father was born: “Ain’t Misbehavin,” “Do Wah Diddy” “Me and My Shadow,” “My Blue Heaven,” ” Moonlight Bay,” “Shine On Harvest Moon.”

Although his repertoire can be classified as early 20th Century Tin Pan Alley Classics in flavours of Pop, Dixie, Ragtime, and Jazz, it’s worth remembering that Redbone’s roots are in Blind Blake, Jelly Roll Morton, Blind Lemon Jefferson. I agree with the Rolling Stone article that described Redbone’s performances as “so authentic you can hear the surface noise [of an old 78].” Paul Asaro patiently backing him on piano provides authentic rinky tinky ragtime riffs that make you happy.

Redbone has style. It’s not the kind of style you get with Lady Gaga or Madonna, who mirror back to the masses every image that flickers across the media. It’s not the kind of style that multiplies an urban or country rock-star into being the centrepiece of an onstage three-ring multi-media circus. Redbone is Mr. Tambourine Man on a small folk-club stage playing the songs some people crave to hear, songs that reach out from deep solitude to contact some other—the moon, a fatal attraction, even one’s own shadow.

Redbone growls when he sings, he slurs words, blurs melody lines to suit his range. He likes to mess with guitar riffs till he finds a swinging, steady (often 2/4) beat, then he croons a few simple verses like Bing Crosby, gets off an inventive instrumental chorus or two, and then he’s done. Message delivered—” I miss you.” Basically Redbone is singing the blues, baying at the moon, using the music and the audience to dig deeper into his solitariness. Or so it seems.

It seems the cat’s name is not even Leon Redbone, nobody is really sure where he’s from, so he “Got to be good-looking ’cause he’s so hard to see.”

Please address your comments to StanleyFefferman@OpusOneReview.com