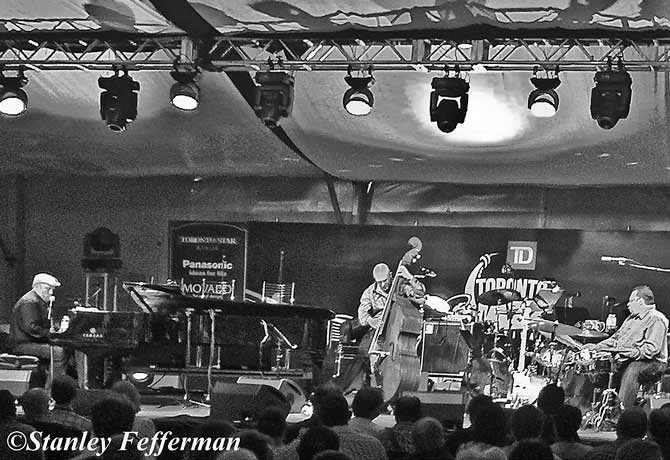 The Robi Botos Trio opened the closing concert of this 25th TD Toronto Jazz Festival with the title tune of their new CD Place to Place (A440 Music Group.) Like a lot of Robi’s tunes, it starts out with an insistent rhythmic pulse, bolded here by Attila Garvas’s six-string electric bass, and from there the piano melody begins to ramble down the road in a kind of fancy free way that has rightfully earned Botos the handle “Oscar Peterson’s heir.”

The songs on the set-list (Robi’s originals and some standards) that surprised me were the mellow-mood romantic ballads: Botos’ own “Long Time No See,” the 1970 Carpenters hit “Close to You”(Bachrach/David), and best of all, a freshly written tune (for the ‘next’ CD) called “Unanswered.” Robi plays the opening chords of this lovely tune solo with one hand in the box damping the strings for a dulcimer effect, then letting out the piano’s tinkle as the rhythm section comes in. Brother Frank on the snares whispers a melancholy message in conversation with Garvas’ stand-up bass talking pizzicato and arco for a chorus or two, then they take it up-tempo towards a rollicking two-step, ramp it down, and let it melt away. The audience ate it up.

We also had fun with “Smedley’s Attack”, a good humoured, original romp depicting Smedley the dog greeting folks who knocked on Oscar Peterson’s door. Robi has a huge, colourful, musical vocabulary that just pours out of him like pitch from a carny barker. It took two encores before the crowd would let him leave the stage for the evening’s main attraction, Nikki Yanofsky. 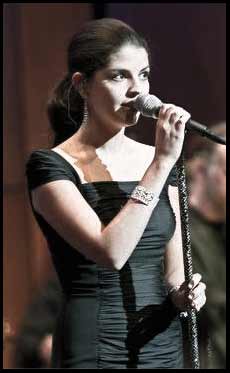 Miss Yanofsky, already a superstar at 17, bounced onto the stage in a little black dress, and, backed by a nine-piece band, rocked us right over to 1929 with “The Sunny Side of the Street.” She followed this with Irving Berlin’s 1935 (Fred Astaire hit) “Cheek to Cheek.”

This girl has taste and verve aplenty. Nikki also has amazing pipes, chops, and control. However, I was happier the night before, listening to Diana Krall sitting at a Steinway bring the  subtle, smokey styling of a fully developed artist to the same tune.

Nikki covered Ella Fitzgerald’s “Lullaby of Birdland,” note for note, which was attractive but not very interesting. She generated a lot of excitment in the Beatle’s “Oh Darling,” with her totally go-for-it voice and laser-guided ear.  She’s got everything she needs to go from  great expectations to the real thing.