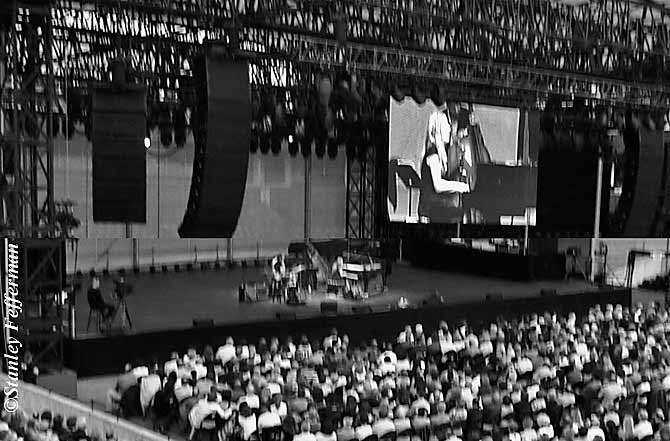 Diana Krall, fast and sassy in a little black dress crosses the stage before 7000 fans at the Rexall amphitheatre in Toronto, sits down at the keyboard and shows she’s got chops. She’s also shows great taste in her set-list—picked flowers from the Great American Songbook, which she jazzes, often to a Bossa Nova beat, and vocally styles in a way that’s all her own. She delivers “I’ve Grown Accustomed to Her Face” (My Fair Lady—Lerner and Loewe, 1956) in a blue-tinged style, improvising the melody as she sings, flattening it, extending some vowels, cutting others short: in short, a jazz musician’s performance—intelligent and full of soul.

Ms. Krall gives her band lots of room to shine: Robert L. Hurst III on bass, Anthony Wilson on guitar, and drummer K. Miggins (who does some great bare meat bongo beating on “Exactly Like You” (Dorothy Fields, Jimmy MacHugh, 1930). During her keyboard solo, a low-flying airbus added it’s bass-drone to the proceedings. Ms. Krall looked up from the keyboard, scoped  it thoughtfully, then, with her signature wry smile, started singing lines from “Let’s Get Away From it All,” and (homage to Tony Bennet or Mary Ford) “Fly Me To The Moon.” A moment of high performance art IMHO.

From there she fearlessly went to the surrealistic “Jockey Full of Bourbon” from Tom Waits’ 1985 Album Rain Dogs, even singing through cupped hands to get Waits’ bullhorn effect. She merged that tune with Joni Mitchell’s reverent, hyper-Canadian 1970 love-song “A Case of You,” and finished the set cheeky and classy with Irving Berlin’s 1935 Fred Astaire movie hit “Cheek To Cheek.”

Tony Bennett is Tony Bennett is Tony Bennett. Just for being who he is, when he smiles with that flash of verve, he gets a standing ovation. At this point, his way of delivering a song relies on a smooth, rhythmic recitation that can suddenly soar for those screaming high notes, where ( as Bing Crosby used to say about the low notes) ” the money is.” When Mr. Bennett sings,”I’ve Got Rythmn”(Gershwins, Porgy & Bess, 1930) you think he’s singing to you, for you, about the way he feels. He can make you relive musical history in a setlist that includes “Steppin’ Out With My Baby” (Irving Berlin, Easter Parade,1948); his own 1950 hit of a 1930’s song “Sing, You Sinners,” and, also from 1950, “Cold, Cold Heart,” that Hank Williams brought to the top of the country-music chart and Bennett brought to the top of the Billboard Pop chart.

Alas, when real-time thunder, lightning and rain interrupted all this hand-on-heart enjoyment, streams of senior fans, umbrellas unfurled, flowed from the stadium to their cars, and despite Mr. Bennett’s trooper stance, and a wet but willing remnant of fans, there was no singing in the rain. The concert was cancelled. Too bad: I might have heard Tony Bennett live doing my favourite of his lines “Because of you, there’s a song in my heart….”