TD Toronto Jazzfest: 5 after 4 opens for Bela Fleck and the Flecktones by Stanley Fefferman 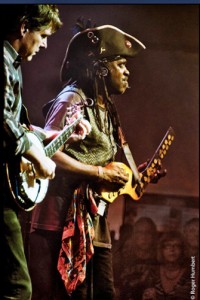 Two kinds of news. Bela Fleck is back together with the original Flecktones. This includes drumitarist Roy “Futureman” Wooten with a newprototype Drumitar, the MIDI-based device that allows him to trigger percussion samples using his fingers; bassist Victor Wooten; and after almost two decades hiatus, pianist/harmonica player  Howard (“The Man With Two Brains”) Levy. They headlined and rocked the tent for a standing-room only crowd with songs from their new CD Rocket Science.

Rocket Science is a big-time deal that you can read about anywhere. The news that counts here is the return of Vito Rezza and his quartet 5 after 4 with a  new and intriguing sound from their very soon to be released 5th CD, Rome In A Day. Rezza contributes 6 tunes to the Alma Records album he made with a longtime crew including producer Peter Cardinali (pictured here) on bass, John Johnson on sax, 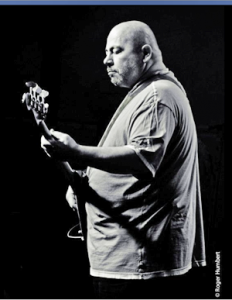 Vito Rezza is a drummer I enjoy listeng to. He blends an endlessly improvised landscape of percussion tones and  textures into the soundspace that swell from  grainy to pebbly, forming terrains that crack and split then liquify in the cymbals to splashes and sprays. And it’s interesting to hear Rezza conduct from the drum-kit— signaling the changes.

Their music has a full, immediate feeling—like Rome built in a day. The mood is mellow, the style leads with melodies that give each player freedom to move without straying too far from the pack.

5 After 4 work up a groove that swings, gently though not quite smoothly, romantic in the way of nature rather than lovey-dovey, spiritual and slightly new-age, but with plenty of energy.