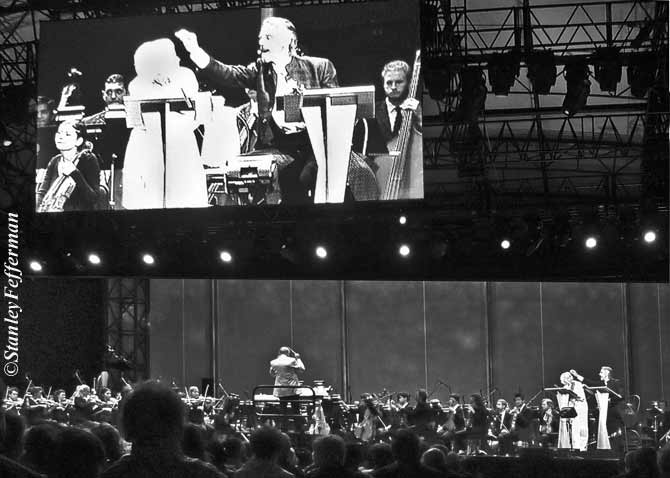 We saw them live and on the huge multi-videocam-fed monitor as the ominous opening chords of Prokofiev’s ballet Romeo and Juliet (1935) rumbled out of the 120,000 watt state-of-the-art system V-DOSC speaker system.

Prokofiev’s slinky, lupine “Montagues and Capulets” sequence moves like an animé of Peter and the Wolf, where all menace is exaggerated to the magnitude of the emotions they arouse. “The Death of Tybalt” music got extra sparkle from the hi-def tweeters, as did the gathering strings and harp passages in the first part of Tchaikovsky’s Romeo and Juliet Fantasy-Overture (1869/1880).

Maazel’s careful conducting, examined by the huge monitors, brought out Tchaikovsky’s sense of passions as slumbering forces that gather erupt, and exhaust their fury like storms do. Among the many themes of this old favourite is the tragic central rhapsody (much played in the 1940’s as a ‘soap’ theme) whose poignant strains seem to be a simultaneous hello and goodbye.

After intermission, the stars came out. Dame Helen Mirren and Jeremy Irons inserted dramatic readings (scripted by J.D.McClatchy) from Shakespeare’s A Midsummer Night’s Dream into the orchestra’s performance of Mendlessohn’s Incidental Music to A Midsummer Night’s Dream(1826/1843). They were supported by a chorus and soloists—sopranos Joyce El-Khoury and Tharanga Goonetilleke.

This supreme pair of actors cheered the long, cool evening with the magic of  Shakespeare’s English. Irons stormed as Oberon, king of the fairies, brayed like the ass-headed Bottom, simpered like Puck, fawned like the London’ Globe actor of the play and play within a play. Mirren was imperious and acid as Titania, sleepy, loving, supplicating and submissive in the various female lover parts. Both were natural on stage and kind of supernatural on the monitors which seemed to magnetize the attention.

It was a rich week-after-Midsummer’s Night (June 23) experience, a night traditionally dedicated to love and magic, when supernatural beings can interact with mortals.