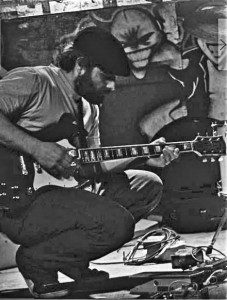 Gord Grdina, Vancouver-based oud player and guitarist who gets mentioned is the same breath as  jazz legend Jim Hall, who has recorded with Gary Peacock and Paul Motian, holds his Telecaster like an assault rifle.

Grdina and his band played for their lives, like they were fending off a full-scale aerial bombardment. Grdina’s guitar extrudes a distressed, howling whine; Mats Gustafsson on baritone sax is a freaked Rottweiler raging to choke himself or break his chain; Tommy Babin on stand-up bass and Ken Loewen on drums drive their fractal textures like tanks over a sonic terrain that is unrolling with pauses or gaps: it’s total war.

The set-list is the  5-song soundtrack of their latest Drip Audio album, Barrel Fire, that is getting a lot of attention from folks who also like John Zorn, Ultralyd, Ornette Coleman, The Dead Kennedys and King Crimson. Personally, I felt like Kerouac when he wrote about going into a Chicago club and hearing jazz that brought to his mind “Charlie Parker in his early days when he was flipped….” Barrel Fire is like that: music that sounds like it is happening.

Some highlights. In the fourth tune, Mats starts out bubbling the spit in his horn, builds it into an ostinato, breathless solo in which he begins to find unearthly chords that he belches out, stretching them till they scream. The trio, ever tight, jumps full-tilt into the blast, keeping perfect time, never coming up for air—Babin’s bass riffs thick and fast as a drum-roll with little bits of tender melody caught in it, and the whole flow melting like lava, full of gorgeous patterns repeating like a rosewood grain.

The encore was the agony of metal pried off a body by the jaws of life shredded in the air and falling like chiming bells. Add a beat to it and you get human sounds, the feet of an angry mob, a riot, a rush for the doors in a burning movie-house. This band gives a whole new meaning to the verb “to wail.”

The Gord Grdina Trio with Mats Gustafsson make ” a joyful noise” that comes from vision, deep technique, broad taste, and fine intelligence. Good idea to have them to this Festival. Invite them back.