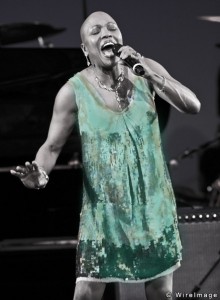 There ain’t a dame anything like Dee Dee, but her show last night didn’t work. Perhaps it was because the opening act, Toronto’s Mario Romano Quartet was so fine musically: and they connected the audience to their music. Pat Labarbera swang on tenor sax through the calling chords that open “Night in Tunisia,” establishing the supremacy of bop. Mario followed strongly with his signature lush piano progressions, backed by Roberto Occhipinti whose work on standup bass is a privilege to hear. Mark Kelso’s drum-kit filled the atmosphere with a light patter as compelling as rain on the cottage roof.

If I never hear a better arrangement of  “Norwegian Wood,” than Mario’s, that’s all right with me. You never get a hint of the lovely melody among the teasing variations of the piano  introduction, until the tenor sax kind of slides it in at a cool angle and there’s pure delight the rest of the way.

The group has an amazing chemistry: Mario is the leader and the others keep him strong; Roberto, the ringmaster, cracks the whip that keeps the time and cues the breaks; Pat’s the star, the virtuoso; Mark, the special guest, fits in everywhere adding just the right sparkle. His duel with Occhipinti at the end of “But Not For Me” was a real highlight. The bass sent out a challenge to slow the tempo and shift the accent to progressively slower, more unpredictable units, but Mark tap-danced after him like the monkey on the weasel. Very cool.

After intermission, Dee-Dee’s pianist Edsel Gomez  and the all-white, all male, all-star Jazz Festival Orchestra were in their places when herself strutted onto the stage. Dee-Dee is big, bald, ballsy. Electrical energy seems to crackle up those long, skinny legs teetering on brilliant green stilettos, and when she opens her mouth, she blazes. Shifting moods, modes, styles, tones, timbres and voices flicker out of her like the Aurora Borealis. She goes so far out, but the audience couldn’t quite go with her.  Dee-Dee was intimidating, and here and there, after a while, people drifted out of the hall.

The set-list was supposed to be based in her latest ‘Grammy-winning’ album Eleanora Fagan (1915-1959): To Billie With Love from Dee Dee. “Lady Sings the Blues” had a real, gritty quality. The charts for “Good Morning Heartache”, arranged by Edsel Gomez had a lovely 40’s big band flowing  soundin the brass. For some reason, she moved much of the rest of the show to her 2003 Ella Fitzgerald tribute album: the songs became more upbeat but somehow brought out the wierd, nutty-as-a-fruitcake, trickster side of Dee Dee, and it began to feel like she was putting us on.

Nobody can act like Dee-Dee. Nobody has the range of colours and textures that Dee-Dee commands in her instrument, nor is there anyone (except perhaps Ella) that I’d rather hear scat, especially when Dee-Dee goes raunchy as in “A Foggy Day,” or when she goes instrumental, taking trombone or muted trumpet to the edge of nasty as in “Undecided,” “Mr. Paganini,” and “Them There Eyes.” Late in the set, she brought back Billie in “You’ve Changed”, which was a big WOW!  But if she had gone on to cover Ella’s “My Heart Belongs to Daddy” instead of baby-talking to the audience incessantly about her first ex-husband/daddy, Cecil Bridgewater, I would have been more comfortable.