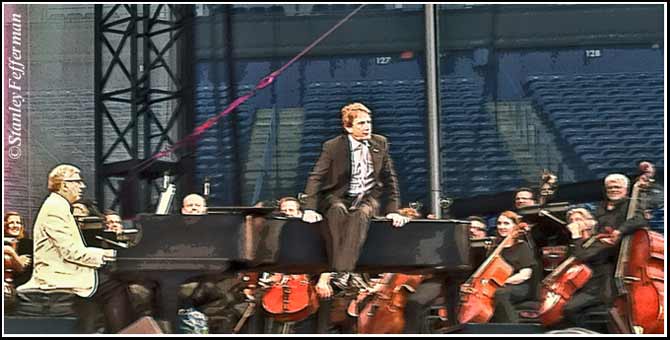 It was a laugh-till-you-cry show, and just when you thought it doesn’t get any better than this, it did.

It was like Raúl Esparza standing on the lid of the Steinway belting out “Defying Gravity” (Wicked, 2003) that brought the audience screaming to their feet, and you wonder ‘how can anybody follow this?’

And Brian Stokes Mitchell kind of slides onto the stage wearing a big, sheepish grin, his palms turned up in a gesture of helplessness, and the orchestra softly intones the opening bars of “The Impossible Dream” from Man of La Mancha (1965) and you know we’ve got lift-off—again. And, as it turns out, again and again.

How funny was M.C. Martin (he can really sing) Short? He was so funny he got the symphony orchestra string section to laugh along with  the audience. Ever-outrageous, Short ambushed Jane Krakowski with a bend-over-backwards kiss as she came on to vamp her way through Cole Porter’s “My Heart Belongs to Daddy”(1938). Ms. Krakowski ‘brought it down a bit’ and tenderly by announcing she was a new ‘older’ mother nursing her infant (at the hotel), as lead-in to her song “A Quiet Thing” from Flora The Red Menace (1965).

Martin Short and Raúl Esparza came from backstage and stood in the side aisle to watch Jane’s number. This was a very human moment in a show that demonstrates and confirms conductor Marvin Hamlisch’s stated belief “in the power of music to bring all people together.”

The Very, Very Best of Broadway is bigger-than-life performances of a take-no-prisoners set-list. Brian Stokes Mitchell, beaming charisma, wowed the older ladies in the audience with the deep notes of his cover of Ezio Pinza’s “Some Enchanted Evening,” from South Pacific (1949). Audra McDonald set aloft “Summertime”  (Gershwin/DuBose, Porgy and Bess, 1935) with her buoyant soprano. Raúl Esparza, electric and tender, brought nostalgia up-to-date with the 1967 Franky Valli hit “Can’t Take My Eyes Off Of You” currently in the Crewe and Gaudio hit Jersey Boys. Brian Stokes Mitchell’s second tribute to South Pacific and Ezio Pinza, “One Dream In My Heart,” actually got a trio of sixty-year-old ladies in the next row weeping and wiping, but these same ladies got happy the next moment singing along with Audra McDonald on Loesser and Lowe’s “I Could Have Danced All Night,” from My Fair Lady.

The centre-piece of the evening was the duet “On the Wheels of a Dream” by Audra McDonald and Brian Stokes Mitchell, the stars of Ragtime at it’s world première in Toronto 13 years ago. They publicly acknowledged that Toronto impresario Garth Drabinsky (who was in the audience) is the man responsible for their collaboration both then and now.

Their performance was a swirl of whipped-cream on the evening’s cake. Raúl Esparza added a heart-sized cherry with his no-holds-barred “Somewhere (There’s a Place for Us)” from the Bernstein/Sondheim classic West Side Story, 1957.

Songs like “Somewhere”, and Jerry Herman’s “Hello Dolly”(1969) sung by the amazing BlackCreek Festival choir , tunes you know the melody of and most of the words to through the power of Broadway, inspire the audience to express their joy by singing along quietly inside (together), or by raising up their voices to sing out loud, together .

It’s a great moment when you melt with others into a flow of mutual appreciation. And when the evening ends with the entire cast and audience on their feet for “Give My Regards to Broadway,” that IS as good as it gets.