Posted on December 9, 2013 by Stanley Fefferman 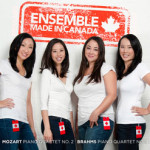 Ensemble Made in Canada offer Piano Quartets by Mozart and Brahms for their debut CD.  The program is nicely balanced and they play well together with a sense of style and with something to say about each work.

Mozart wrote his Piano Quartet No. 2 in E Flat major, K. 493 of 1786 to showcase the clarity of the Stein fortepiano whose novel engineering gave him opportunities for subtleties of dynamic contrast, articulation, shading, colourings and orchestral textures that were unimaginable on the previously available keyboards.

The Ensemble’s opening tutti invites you into that excitement. Mozart’s writing then separates into parts for piano and for string trio. The call of Angela Park’s piano has sparkle. The string’s answering response in both antiphonal or unison passages has an intriguingly yielding, dare I say, feminine quality. The voice of Sharon Wei’s viola underscores some sensuous and intimate moments during the recapitulation. Generally, the Ensemble chose and held a perky tempo that comes across as ‘Sentimental’ in the Eighteen century sense, meaning their main subject inclines to feelings more than to form.

The songlike Larghetto is lush and liquid; but the pace they maintain is sluggish, relieved by the piano’s crystal runs and the thrilling throb of Rachel Mercer’s cello. In the end, and after enjoying the liberties Mozart allows for individual voices to combine freely in various alliances, what the Ensemble has to offer comes down to this: they find in Mozart’s contrasts a bold sense of drama that makes the music sound at times like Beethoven.

It is not surprising that the Ensemble keys this note of drama up several notches in the Brahms Piano Quartet No. 3 in C minor (“Werther”), Op. 60. As the subtitle tagging Goethe’s suicidal hero suggests, this Piano Quartet is dark matter, the stuff of melodrama. Begun in 1855 but not published till 20 years later, this work belongs to the period in Brahms’ life that was gored by the horns of his love for Clara Schumann and  his feelings of guilt over her husband Robert Schumann’s attempted suicide, madness and death.

Emotional turbulence marks the character of the second movement scherzo. The piano part is especially dense, but Angela Park keeps it agile and flowing. Elissa Lee’s violin provides a strong leading life-line through the emotional froth. The penetrating lament of Rachel Mercer’s cello in the third movement achieves consolation in a dialogue with the piano. As the third movement develops, the conversation among the instruments establishes a tone of emotional balance, neither sentimental nor melodramatic, as if everything is just right and everyone has just what they need. The descending figures of the finale plunges us back into dark matter.

This is a bold and stylish debut for Ensemble Made In Canada. The sound of their recording in the Glenn Gould Studio co-produced by violinist Scott St. John and engineered by Ron Searles is first-rate.

This entry was posted in Reviews and tagged Angela Park, Elissa Lee, Ensemble Made in Canada, Rachel Mercer, Sharon Wei. Bookmark the permalink.