Plenipotentiaries of the Piano: Five CD Reviews by Stanley Fefferman

Posted on December 8, 2013 by Stanley Fefferman

There has been a predominance of piano music coming for review in recent weeks. The players are among the best in the world: Angela Hewitt, Stephen Hough, Marc-André Hamelin, and Kristian Bezuidenhout. Their albums, in my opinion, are gifts to the world. They do not require many words of introduction or recommendation beyond these: listen carefully. 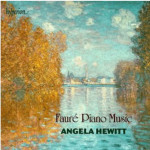 Angela Hewitt is currently offering her favourite solo piano works by Gabriel Fauré (1845-1924). The selections she has chosen for this album are ‘old friends,’ works Ms. Hewitt learned in her teens and twenties with the help of LPs. Her difficulties in memorizing Fauré’s works reccommend them: their “unmistakable harmonic language and melodic contours,”  their “constantly shifting harmonies, enharmonic changes pushed to the extreme, slight variations in passages that are otherwise similar—[and] the sheer technical difficulties.” Reading about these ‘difficulties’ makes my mouth water. Angela Hewitt  writes as well as she plays—her liner notes are a feast of information and direction to enhance your listening pleasure. FAURE Piano Music. ANGELA HEWITT. Hyperion. Distributed by Harmonia Mundi. 7 tracks. 72’51” 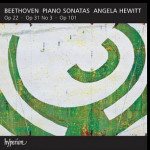 Angela Hewitt’s fourth album of Beethoven Piano Sonatas continues her practice of organizing works not by the numbers of date or opus or period, but as a recital that expresses what she feels the music has to say. Her playing is free from egoism: as someone said, “every note she plays honors the composer.” If she adds anything to Beethoven, it is the warm sound of her 1981 Fazioli. Angela Hewitt offers three sonatas that had special meaning for the composer during successive stages of his career. The B flat major Op. 22 that Beethoven declared was ‘really something’ when he published it with his Symphony No.1; the E flat major, Op. 31, No. 3 from the composer’s middle period when Beethoven’s unique voice manifested in his Symphony No. 3 “Eroica”; and the A major, Op. 101 that Beethoven dedicated to his favourite pianist and pupil Dorothea von Ertmann.  BEETHOVEN Piano Sonatas. ANGELA HEWITT. Op.22, Op. 31 No.3, Op.101. Hyperion. Distributed by Harmonia Mundi. 12 tracks. 72’29” 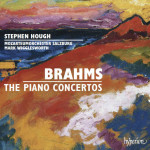 Stephen Hough, a MacArthur ‘genius’ Fellowship holder is especially known for his recordings of the complete Rachmaninoff piano concertos(CDA67501/2) and the complete works for piano and orchestra of Saint-Saëns(CDA67331/2). Hough is gaining respect as a composer with a distinctive voice. He is also an energetic blogger who posted the following remark about the two Brahms concertos he has just recorded:

“I would venture to say that of the two Brahms piano concertos the Second is the better piece but the First is the greater piece. I think the Second is better constructed, better orchestrated, themes are better developed, harmonies are better judged, textures are better balanced … but to me the First has a greater burst of utter, natural, divine genius.  Its flame flares with such intensity, and with such promise of more to come, that I find myself overwhelmed by it in a way I’m not by the Second. ” Sounds like a win-win.

Hough’s recent double-disc recording for Hyperion is in competition with the record he made for Virgin in the late 1990’s. The newer recording has superior dynamic range and detail. The Mozarteum Orchester Salzburg under Mark Wigglesworth values simplicity and purity of line over the orchestral richness offered by Hough’s previous partnership with Andrew Davis and the BBC Symphony Orchestra. Nonetheless, the enthusiasm Hough brings to his new D minor is frequently thrilling. Throughout the B flat major, the cable-tautness of Hough’s attention to architecture is palpable and entrancing. Hough’s piano textures in the Allegro are protean in their shape-shifting. The Andante is memorable for the intimacy Hough shares with Marcus Pouget’s cello. The finale sparkles like sunlight on a mountain brook.

Whether you have an affinity for the Olympian gravitas of the Second concerto, or like Hough you are vulnerable to the intensity of the First doubly coupled to Brahms’ love for Clara Schumann and  his feelings of guilt over her husband Robert Schumann’s attempted suicide, both streams of this album flow from the heart. STEPHEN HOUGH, Mozarteum Orchestra Salzburg, Mark Wigglesworth, BRAHMS: The Piano Concertos. Hyperion. 2 Discs. 7 tracks. 97’59”. 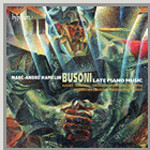 Marc-André Hamelin with more than 90 CD’s in his discography may well be the most recorded classical pianist alive. A virtuoso’s virtuoso, Mr. Hamelin has delighted in making recordings of composer-pianist-virtuosos like Valentin Alkan and Leopold Godowski, whose reputations, like Lizst’s until recently, inclined towards their technical facility and transcription abilities by a public that values originality above all things. This album is Hamelin’s long look at one such composer to whom Mr. Hamelin gave a passing glance on eight of his earlier recordings: Ferrucio Busoni (1866-1924).

Busoni was one of the great pianists of of the first half of the 20th century. He championed the music of Liszt and Alkan. Busoni was also a great teacher. He held posts in Moscow, Helsinki, Boston and New York before settling in Berlin. Kurt Weill was one of his students. Despite a massive output of original compositions for the piano, his reputation seems to have rested on his transcriptions of Bach. It is possible that his compostions remained in the shadows of his transcriptions because most of them are so difficult to play. Few pianists were able to stand up to the risk of raising them from obscurity—until Hamelin.

In his current 3 CD project, Hamelin has gathered 196 minutes of solo music from the last 15 years of Busoni’s output (1909-1924), some of it never recorded before. Busoni’s Seven Short Pieces for the Cultivation of Polyphonic Playing (1923) clearly show one side of Busoni’s predeliction. The Sonatina seconda (1912) written without key and time signatures or bar lines show his contribution to the development of pantonal music in the 20th Century.

It goes without saying that Hamelin effortlessly overcomes the technical challenges of the major works like the seven Elegies, and cultivates the myriad smaller pieces with intelligence, confidence and transparency. Hamelin is obviously sharing an adventure: what would be the point of refusing to follow a guide as intrepid and dazzling as Hamelin?       Marc-André Hamelin, BUSONI Late Piano Music: Elegies, Sonatinas, Toccata, Klavierbung (excerpts), Indianisches Tagebuch, Fantasia After J.S. Bach. Hyperion, distributed by Harmonia Mundi. 3CD’s, 195’54” 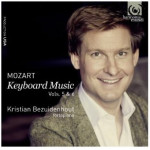 Kristian Bezuidenhout has been called the finest living exponent of the fortepiano. His current double-disc recording is volumes 5 and 6 of Mozart’s compositions for the keyboard between 1772-1781, the period of Mozart’s employment in Salzburg.

It is also the period during which Mozart discovered the Stein fortepiano about whom he wrote to his father: “His instruments have this special advantage over others in that they are made with escape action….Without an escapement it is impossible to avoid jangling and vibration after the note is struck.”

Mr.Bezuidenhout plays on a modern replica of a Sohn keyboard very similar to the Stein that so excited Mozart. It goes without saying that the clarity and crispness of this antique keyboard suits special elements in the Mozart’s music. On the other hand, since the fortepiano became obsolete late in the  19th century and has only lately been revived to cater to renewed interest in ‘historically informed performance,’ its faint metallic buzzing in the bass and tinkling in the high register may not be to the taste of everyone whose ear has been informed by the stronger, more even and rounded sound of the modern grand piano.

That said, I was taken by Mr. Bezuidenhout’s ability to express the subtleties of dynamic contrast, articulation and shading that Mozart began to mark into his scores subsequent to his discovery of the Stein with its escape action. The Stein fortepiano also opened up for Mozart colourings and orchestral textures that were unimaginable on the previously available keyboards including the harpsichord. Mr. Bezuidenhout conveys a feeling that I like to imagine is Mozart’s satisfaction in these new expressions at the time of writing and in the playing of his students for whom several of these work were written. Although the sound of the fortepiano is not exactly native to my taste, because of Kristian Bezuidenhuot’s brilliance in this and previous volumes of his Mozart project, it is on the way to becoming an acquired taste. Here, for your interest, is the setlist: