Sweet Nutcracker Suites by Ellington/Strayhorn and Tchaikovsky: a CD review by Stanley Fefferman

Posted on December 6, 2013 by Stanley Fefferman 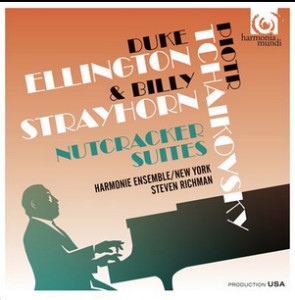 This is an album that asks the question—”Does the Duke Ellington/Billy Strayhorn ‘Americanized’ version of The Nutcracker Suite give the original ‘European’ Tchaikovsky a run for its money?” I think it does.

I ran my experiment this way. I played the American version tracks first, and I liked every one. I liked the surprise of Ellington’s “Overture”, how the bold standup bass-line high-step-walked out ahead of the brass, turning what I remembered from the original as a kind of polite dance of orchestral strings into a big swing marching  band. That clash of cultures is witty and cool.

Ellington and Strayhorn did their ‘Swingin’ the Classics’ deed in 1960 at Strayhorn’s suggestion. They used Tchaikovsky’s familiar balletic melodies as the basis for the kind of orchestral dance tunes in the Jazz idiom they had been putting together since the late ’30’s. On the bones of the Suite they hung Blues, Rags, some hard swinging riffs with chirping licorice sticks, mocking muted trumpet gargles, swirling saxophones and wailing brass, substituting  for sugar-plum fairies and nursery toy-soldiers the hipster/gangster Harlem/Broadway guys and dolls in zoot suits and two-tone shoes.

Their ‘version’, if I may call it that (since really it is nothing but original variations on classic themes) has all the colours and flavours of that time when jazz was the popular music of the day. It has the dignity of freedom and the cool of looking back over its shoulder at where it came from.

Far from mocking or parodying or trivializing the original, the ‘crossover version’ in my listening enhanced the Tchaikovsky, refreshed the brilliance of the original arrangements, brought the elegance and dignity of the classic smartly into focus.

The project of putting recordings of both works on the same CD belongs to conductor  Steven Richman and his Harmonie Ensemble/New York. Richman, a Dvorak specialist, sees this project as an expression of the music Dvorak visualized for the New World during his residency in New York, 1892-95.

Are these Nutcracker Suites great music? Apparently Ellington didn’t really care for his version any more than Tchaikovsky cared for his. Nonetheless both works have retained their popularity over the years, especially during the winter holiday season, because they touch the imagination and give so much pleasure to so many people. Together, they make a lovely couple.