Posted on December 5, 2013 by Stanley Fefferman 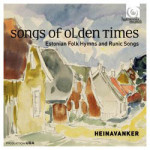 If you have an ear for rhymes in a language you are fortunate not to understand so your mind is freed from the burden of meaning and you can savour the joys of pure sonic shapes, then that’s one very good reason Heinavanker is the CD for you.

If, like me, you are innocent of any knowledge of folk hymns and runic songs of ancient Estonia, you will be enchanted by the pared-down simplicity of these ‘twirling and ribboned’ tunes, presented between chant and song in shifting metres by exquisitely pure female and male solo voices against eccentric organ-like harmonies of chorales that come and go like shadows of cloud over wheatfields.

The purest pleasures are to be found in the three ‘Runic Songs’ because their music is the most decorative, taking their inspiration from the ‘runic alphabet’ which is in the form of figures like hieroglyphs whose content is wisdom concealed in riddle-form. They are meant to be felt rather than understood, and for that reason the symmetries of melody, word phrases, and metre are especially penetrating.

The vocal ensemble Heinavanker is a team of seven musicians founded and led since 1996 by composer Margo Kõlar. Heinavanker delves into ancient sacred music traditions in an effort to restore Estonian national identity and the importance of the Christian church that were being ‘erased’ during Estonia’s half-century as a Soviet Republic.

For an outsider like myself the pleasure of this music is in the flow of repetitions that soothe, variations that intrigue, and the possibility of being, as one witness of a live performance put it, in the presence of singers who “no longer knew whether they were seated on wooden benches or floating in the sky.”