Posted on December 4, 2013 by Stanley Fefferman 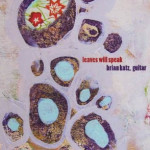 “The guitar is a quiet instrument,” said Andrés Segovia. When Brian Katz plays you hear that he is inward bound on a voyage of discovery as much for himself as for his audience. One third of the 18 tracks on leaves will speak, Brian’s 12th record and his first solo album, are improvisations based on motifs he heard in traditional music, on sounds he heard walking in the  streets, or at home while tuning his guitar. All but one of the other dozen tracks are Brian’s original compositions.

“The guitar is an orchestra in your lap,” said Beethoven. Brian gets a wide soundstage of colours and timbres with his instrument, creates dramas of musical conversations in his compositions, both the written and improvised, by artful rhythmic shifts, by bending times, mixing beats and changing metres.

The whole vibe is Brian’s own blend of classical, medieval, Spanish, Jazz, Blues, finger-picking Folk, Greek, Middle Eastern and Klezmer— you can hear all those threads in the weave of this album’s harmonic fabric. You can enjoy the play of musical intelligence on this album, and dig into a rich horde of experience gathered along the way of Brian’s 30 year international career.

“You Too,” puts folk finger-picking in the picture, but without flash, accentuating cool deliberation in dealing out the beauty. “Yellow Streams,” improvises on what I hear as fragments of “Greensleeves” blowing in the breeze of a jazz idiom bringing to mind Ralph Towner and through him Bill Evans. In “Essentia” Brian displays the delicacies of the Spanish guitar. “Fun at Fluff’s End” is kind of crazy mash-up guitar and drumming riffs. And so on. You get the idea—there is a lot of listening in the masterful medley that is leaves will speak.

Here’s an odd thought. I listened to this album three times right through while driving on highways at night. It seemed to me Brian repeats himself quite a bit. But when I pick out a tune, at random, say while I’m walking with my device on shuffle, every track sounds fresh and charming. His technique is impeccable and the recording sound is warm as wood.

For more and much more into goto http://briankatz.com/releases/leaves-will-speak/

This entry was posted in Reviews and tagged Brian Katz, leaves will speak. Bookmark the permalink.