Posted on November 22, 2013 by Stanley Fefferman 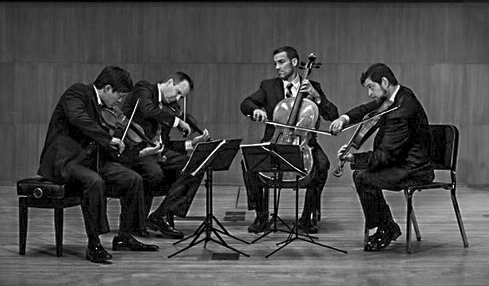 The program consisted of works Schubert wrote during transitional times in his disastrously short career, times when he was dealing with unfinished business.

Quartettsatz in C Minor, D.703 (1820) came when Schubert was 24, during the period eight years before his death when he wrote his Eighth ‘Unfinished’ Symphony. Schubert abandoned this Quartet after finishing only one movement, and he stopped writing chamber music during his next four years.

The anguished single movement reflects Schubert’s struggle to absorb the heaven-storming example of Beethoven’s music after literally dashing off eleven string quartets inspired by the examples of Haydn and Mozart. The three themes in minor of the Quartettsatz are aetherial, trembling with suspense, pregnant with anticipation of the unexpected.

Each of the Miro players, as violist John Largess explained, had “plenty to do” managing the virtuosic writing, and manage they did, balancing Schubert’s mood swings from windswept explosions to tender sweetness by maintaining vivid separation of instrumental colours.

String  Quartet No. 11 in E, Op. 125, No. 2, D. 353 came when Schubert was nineteen and had just left off living and performing at home with the  Schubert family amateur string quartet. The Miro gave this seldom performed work a bold and youthful treatment, negotiating the frequent and sudden changes of key with deft assurance. The sonic landscape they created was marked by bold rhetorical flourishes and passages of lyrical lightness and grace.

The Miro’s final presentation, the String Quartet No. 14, D. 810, (Death and the Maiden, 1824) acheived a marvelous transparency. Their tonal flow gave off a consistent glow and a glamour of colours. The second movement set of variations and the Finale’s breathless tarantella were particularly thrilling.

For an encore, violinist Daniel Ching introduced the ‘unfinished’ fragment of a second ‘slow’ movement Schubert had drafted for the Quartettsatz. Mr. Ching warned us that the writing just quit in the middle of a phrase by the first violin, and that’s exactly what….

This entry was posted in Reviews and tagged Death and the Maiden, Jane Mallett Theatre, Miro Quartet, Schubert. Bookmark the permalink.