Posted on November 17, 2013 by Stanley Fefferman 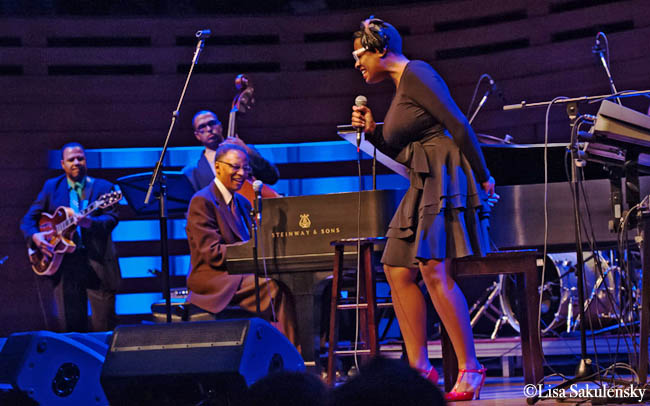 Composer-pianist Ramsey Lewis is a jazz legend, but I came out hear Cecile McLorin Salvant sing.

Lewis and the Quintet opened with the funky beat of his 1976 Earth, Wind and Fire hit, “Brazilica.” They followed that with a medley including a deeply reverent rendition of Coltrane’s dark-hued “Dear Lord,” and Ornette Coleman’s “Blessings,” the latter arrangement rich with Lewis‘ signature blend of European Classical and Broadway. The Quintet showed its considerable chops with an awesome solo by drummer Charles Heath, and Joshua Ramos‘ bass solo, arco and pizzicato, on a piece from one of Lewis longer compositions for the Joffre Ballet.

Then, finally, there was Cecile McLorin Salvant. Lewis introduced her as the new  “standard-bearer” of the line of singers starting with Bessie Smith, through Billie, Ella, Sarah, and the recently retired Nancy Wilson. Her performance was in honour of Koerner Hall’s Dinah Washington and Sarah Vaughan 90th birthday celebtation.

Cecile’s “I Didn’t Know What Time it Was,” had it all: the powerful shout of Bessie Smith, Billie’s seductive control of phrasing and dynamics, Ella’s impeccable ear and fine vibrato, the warm colours of Dinah Washington, Didi Bridgewater’s touch of crazy fun, and the perilous deep canyons of Sarah’s vocal range. With all that tribute going on, Cecile’s styling of the song was totally her own. This long-legged 24 year old is as fearless an innovator as any of the seasoned pros and the jazz legend backing her.

Her second, and unfortunately last song of the set, was Cecile’s own composition “WomanChild,” the title tune of her first solo album. There is bravery is in every line: “WomanChild falters/Clumsy on her feet/Wonderin’ where she’ll go/When her time has come/Good she’ll never know/Until she comes undone.” She was invited back for a quiet moment during the second set that featured Lewis and the Quintet doing a medley of crowd-pleasing standards—“Body and Soul,” “The Song is You,” and bits of Lewis’ past gospel-tinged hits “Wade in the Water,” and “The In Crowd.” Cecile put volumes of meaning into the Teddy Wilson 1937 torch song “There’s a Lull in My Life,” but despite the audience’s roar, she never made it back to the stage again. Pity.

The evening ended with a good gospel clap, another awesome bass solo by Joshua Ramos, and the Latin groove of another Ramsey Lewis blast from the past “Hang On Sloopy.” Incredibly, there was no encore.