Posted on November 13, 2013 by Stanley Fefferman 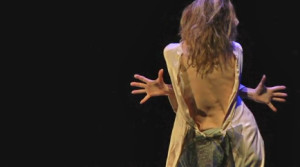 I am writing this in the pre-dawn darkness of the morning after witnessing The Light Between. Margie Gillis’ collaboration with Marc Daigle and Paola Styron gave me a good sleep lit by dreams of bodies, mine included, writhing and squirming like larvae to emerge from solitary confinement and merge with the dance of lightness. My dreams were filled with the gleam of the trio’s muscular flesh swathed in the swirl of Anne Dixon’s costumes, some diaphanous and some opaque, that expressed nuances of exposure, freedom, and security. The limb motif, long paper cut-out arms, hands, and reaching fingers that comprise Randal Newman’s compelling set also featured in my dreams; hands reaching out in agony for assistance, helping hands extending across dimensions of space and time, enfolding, joining and uplifting.

The performance began with dancers isolated, motionless, articulating small joints of foot and hand robotically as if testing the first possiblities of movement in the atmosphere of an unfamiliar planet. Margie Gillis’ intial movements, in Pierre Lavoie’s dramatic lighting, resembled the broken gestures of bodies caught in a strobe. Ms. Gillis’ unique choreography had the three dancers, none in their first youth, moving on and off the stage continuously for an hour at increasingly hectic paces to the minimalist pulses and unearthly sonics of sound designer Larsen Lupin’s original score, integrated with a recording of Yves Morin playing spectral piano music by Scriabin and Chopin.

There was a menage à trois sexual drama going on in the narrative, but that was not as transparent to me as the sense of each character going through modes of ecstasy and agony, solo and in various duets, until the trio came into harmony. Marc Daigle did the heavy lifting and was totally sympathetic in the torments and releases of his character. The most compelling single image of the evening was Paola Styron crossing the stage on her extended fingers and the tips of her toes, her wiry musculature articulate as the greyhound on the album-cover of David Bowie’s Diamond Dogs. Much credit and gratitude to Margie Gillis for the naked enthusiasm of her personal dancing, and for her choreography by which she said something valuable about bodies that remain in motion for a long time, and for the jazz-like quality of her composition that clearly allowed herself and her collaborators to improvise statements-in-the-moment.

The Light Between, presented on it’s cross country tour by the Margie Gillis Dance Foundation, will be in Toronto’s Fleck Theatre in Harbourfront for one more night, Wednesday, November 13. TICKETS