Posted on November 12, 2013 by Stanley Fefferman 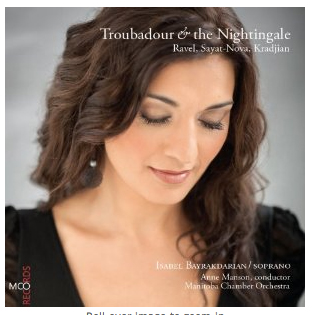 I puzzle over how to express the qualities that make Isabel Bayrakdarian’s voice like no other. After following her through many albums, live in operas and the on the concert stage, I can begin with her blend of richness, intimacy and clarity. To match those qualities with the purity of her tone, you would have to go to a precision instrument. My choice would be a clarinet, but one with gold in its makeup to reflect the burnish on her notes. To render their luminosity, it would have to be made of glass. To transmit the sympathy Bayrakdarian feels for her subject matter of her songs, the itinerant poets, lovers and ladies, their moods of passion and mourning, you would need to bio-engineer living tissue into this already mythical instrument.

To appreciate the flow of her lines, how she makes her melodies soar and swoop and dart and glide, you would need to imagine birds that fly over water such as swallows and terns; and for her ability to sustain long steady pitches you would go to the powerful white wings of the swan. To hear her song as solitary and coming out of dark night, you would go with the poet Shelley to the “nightingale who sits in darkness and sings to cheer its own solitude with sweet sounds,” and in overhearing the song of the nightingale,  like Shelley, “you feel moved and softened, yet know not whence or why.”

In previous albums, Bayrakdarian often chose songs from Iberian traditions which have Moorish roots that share the musical traditions of her native Armenia. The songs on this album reflect the ‘troubadour ‘traditions of medieval Provence, and Greece whose instrumentation, arrangements and cantillation also share roots in Moorish music. So there is a bazaar of Near-Eastern exotic textures excellently woven behind Bayrakdarian into a tapestry by the Manitoba Chamber Orchestra conducted by Anne Manson. Many of the songs are arranged and orchestrated by pianist and composer Serouj Kradjian, who co-produced the album with David Jaeger, which accounts for the album’s flawless quality.