Posted on November 9, 2013 by Stanley Fefferman 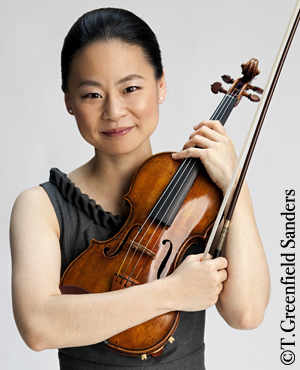 Master violinist Midori played a program of sonatas that brought her piano partner into the limelight. Özgür Aydin’s solo opening of Mozart’s Violin Sonata No. 25 in F major, K. 377  flowed delightfully in liquid tones around the thin, dry figurations of Midori’s instrument. Keyboard and violin equally shared the cheerful development. I enjoyed the poise of the piano parts, Aydin’s shaping of phrases in collaboration with the violin, and the feeling of serenity the partners radiated throughout Mozart’s variations.

In Sonata No. 2 for Violin and Piano, “Poème mystique” by Ernest Bloch, Midori unleashed her magic. In the Bloch, the disciplined vibrato of Midori’s high violin lines floated over the piano passages like a lark over a rocky tor. Her highest tones acheived aetherial colours—a blend of vibraphone, celeste, and ondes martenot. Her lower registers sometimes flowed with bloodlike richness of viola. There was raw courage in the harsh agony suggested by some of her passagework. The concluding section of this single-movement fantasy involved both players, though the writing placed the violin at the front of a drama that moved between the unearthly and the real.

Özgür Aydin’s exquisite piano work remained consistent throughout the long program. The first movement theme of Hindemith’s Sonata in E flat for Violin and Piano No. 1, Op. 11, was introduced by bold piano figures taken dramatically upwards by Midori’s double-stopped violin. The mood of this movement is chromatic and ambiguous,  shifting precipitously between dynamic outbursts and passages of quiet delicacy. The second movement began with a softly dancing piano meditation that picked up in Midori’s angular violin an edgy tension on which the piano improvised. Towards the end, both instruments abandoned their waywardness and nailed an ending redolent of Bartok and Ravel.

The lyrical lines of Fauré’s Violin Sonata in A unraveled a flow of elegance that was refreshingly intimate. Working as one, violin and piano gave expression to the four movements of Fauré’s deeply felt, balanced forms. In Schubert’s Rondo for violin and piano, in B minor, Op. 70 D. 895, Midori and Özgür Aydin worked together, often in imitation, and achieved a singular transparency of tone.

Two generous encores ended the evening with the immediate pleasures of Dvorak’s Slavonic Dances, No. 2, and the march theme from Prokofiev’s Love of Three Oranges.