The Gryphon Trio at Music Toronto: A Night to Remember reviewed by Stanley Fefferman

Posted on December 6, 2013 by Stanley Fefferman 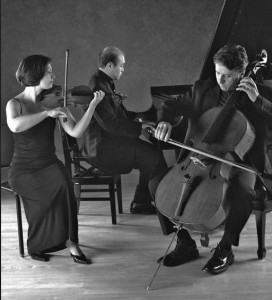 A great night to be with the Gryphon Trio. On the anniversary of their 20th year together, Jamie Parker, Annalee Patipatanakoon and Roman Borys were awarded the Canada Council’s $ 30,000 Walter Carsen Prize for Excellence in the performing Arts. Accepting the prize, Jamie Parker dedicated this evening’s performance to the inspiring life of Nelson Mandela who died today in his 95th year.

In addition to developing a world-class reputation for their classic repertoire, this inspiring Trio has commissioned 75 new works, many by Canadian composers. Not until this evening have they been able to present a work by Canada’s pre-eminent composer, R. Murray Shafer. Trio for violin, cello and piano is the first composition for these three instruments that the 80 year old composer has written. Schafer spoke about his 9 minute piece as a “shaping of familiar things in a new context” that could become a bigger piece “once we’ve tried it out.”

The opening section arose with the Gryphon’s separate voices making layers of sound like various small animals sniffing and moving over a forest floor. The running motions developed expressions of marching, dancing, slinking, buzzing, racing that escalated into a manic Shostakovichian panic. This subsided into a deep seriousness, and a lyricism, especially in Annalee’s violin as it spiralled down into a brief funereal lament. She then took it up into a wonderfully weird and beautiful paranoid passage of oriental virtuosity punctuated by Jamie Parker pounding on the piano until Roman’s cello invoked the rolling of thunder and the music subsided into silence.

The Gryphon Trio showcased two works from the 15th year of their Young Composers Project at Earl Haig Secondary School whose director Phil McConnell praised the Trio for “buzzing through a lot of random notes and finding expressive purpose in them.” Alexandra Hetherington’s Mist  was charming and playful. Ryan Ng’s Cat, Cat, Cat…was so mysterious and melodically expressive I lost track of where I was in the program and thought we might have gone into the Mendelssohn Piano Trio.

When, after much applause and congratulations to the young composers the Gryphon’s Mendelssohn Piano Trio No.2  in C Minor  did come, it was commanding and energetic, passionate to the point where the normally well-trained audience could not withhold their applause after the first movement. Parker’s piano during the Andante evoked the colours of apple orchards in full fruit. The Scherzo was shimmering and effervescent. The Finale opened with a ha-ha-ha passage that broadened into a deeply felt flow both delicate and grand and ended in a clap of thunder. Very satisfactory.

This remarkable ensemble had some magical things to say about Beethoven’s “Ghost” Trio in D, Op. 70. No.1.  Towards the end of the Allegro, Jamie Parker’s piano developed a transparency of touch that emphasized the curvaceous, feminine energies of this work dedicated in 1810 to the Countess Maria von Erody. During the pivotal Largo the dialogue of cello and piano seemed to be probing Beethoven’s structure as if looking for weaknesses and concluded with a finding of impeccable intelligence. The Presto was all confidence and panache that broadened like “the butterfly effect”: one felt the smallest changes swellling to monumental crescendos.

The encore was Valentin Silvestrov’s fleeting, dreamlike Fugitive Visions of Mozart for violin, cello and piano. The beauty of the the piano and violin in perfect imitation sounding like a celeste brought a tear to my eye.