Chamber Music Downtown to the Power of Eight: a review by Stanley Fefferman

Posted on November 1, 2013 by Stanley Fefferman 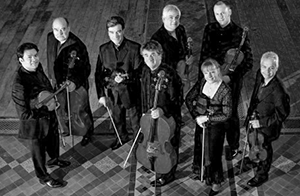 What an awesome octet is the Academy Chamber Ensemble. Packing the punch of two quartets, their sound is vivid: bright and highly saturated, it brought new life to Joachim Raff’s all-but-forgotten Octet in C for Strings, Op. 176 (1872).

Scored for eight independent instruments in the manner of Mendelssohn, Raff’s Octet benefitted from the the brilliant interactions of the Ensemble. As his laconic ideas passed from one instrument to another, the work began to comport itself, especially in the scherzo, with the bouncy sweetness and shifting moods of Beethoven’s Opus 18 Quartets. The slow movement is a tender outpouring of a theme appealingly like ‘Happy Birthday.’ The finale is a moto perpetuo that starts stealthily, then winds up and buzzes along like a finely tuned machine. I’ve never heard it before, but if the Academy Ensemble plays Raff’s again, I would would enjoy being there.

Two Pieces for String Octet, Shostakovich’s Op. 11 (1924) came across as the nine minutes of romantic movie melodrama that it is. The romantic melodrama aspect starts in the composer’s life.  Shostakovich was 18 years old when he began the writing of it. He was a diagnosed tubercular patient. His father had died and Dmitri supported his whole family, while he studied at the Petersburg Conservatory, by playing background piano in silent movie houses. He had just graduated from the St. Petersburg Conservatory with the performance of his First Symphony that won him instant fame at home and abroad. One of his best friends had just died. All this is in the music.

The opening elegaic Prelude conjures dark, mist-enshrouded streets, the  muttering retreats of furtive figures clandestinely meeting. A burst of pizzicato triggers a cut-away, as if to a tom-cat in heat or a drunk staggering–the violins go all Paganini, the elegy resumes and finishes, to be followed by a Scherzo led by cellos who saw and scratch themselves and the Ensemble into a shrill, screaming, dissonant gallop laced with crazy contrapuntal textures: vintage Shostakovich at his paranoid and prophetic best.

Mendelssohn’s Octet in E-flat, Op. 20 (1825), also a teen-age production, was pure enjoyment. It began with a tickling theme that Tomo Keller’s first violin sent soaring and the Ensemble wove into a thick, varied, richly coloured tapestry of orchestral sound that is allowed to fade into a sedated state before exploding in a fiery coda.

The Andante, a polyphonic funereal dream, is deeply moving. The Scherzo is a light-footed dance, a brisk canter, a feather lifted in a sweet, breezy flow, skyward and out of sight. The finale, led by the second cello, is an impossibly fleet fingered race to an unbridled finish.

The ensemble’s spokesperson, violist Robert Smissen, began the concert by thanking Toronto for its fine weather, and ended the evening with an encore that conjured even finer weather, Gershwin’s “Summertime.”

Details of the next Chamber Music Downtown event, The Miro Quartet, can be found HERE