Posted on October 30, 2013 by Stanley Fefferman 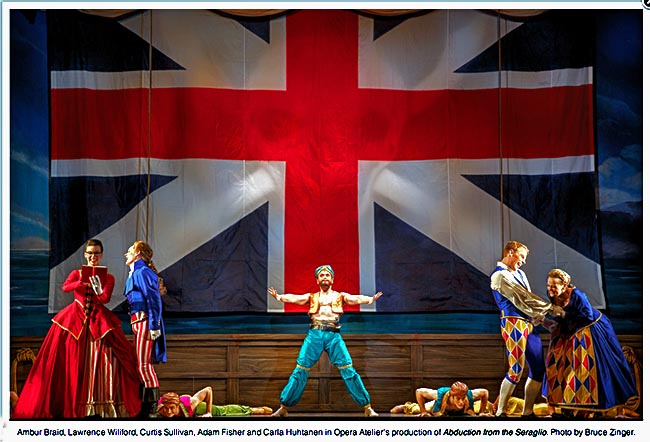 Opera Atelier’s cheerful remount of its 2009 production of Abduction from the Seraglio (Mozart’s most-popular-in-his lifetime opera), had much to make me happy.

The cast members are extraordinarily good to look at in their extraverted costumes coordinated by Margaret Lamb to blend artfully with each other and with the richly detailed Gerard Gauci sets.

Their acting and movements, following Marshall Pynkoski’s direction, are in every case full-tilt free from inhibitions, and liberating to watch.

The situation is basically farcical. The British male and female masters and servants are couples appropriately in love. The British females are abducted and being held captive by an Islamic master and servant who are forcibly demanding sexual favours. The British lovers’ attempted abduction from the seraglio, fails, the would-be rescuers are captured, but the despot decides to release them all.

I am especially grateful that their vaudeville ( ‘voie de ville,’or commedia dell’ arte ) antics made me laugh. It did occur to me, though, to question the timeliness of a humourous treatment of the abduction of British citizens by Islamic pirates, at this point in history. And this question, when it occured to me, dialed my enjoyment down a bit.

I reflected that Mozart’s opera (1781) came out about a century after Hapsburg forces lifted the Ottoman Siege of Vienna and halted the Islamic empire’s advance into Europe.

At a distance of 100 or so years, the clash of the two cultures provided an appropriate context for Mozart to dramatize his own clash with the familial and ecclesiatical powers that had been holding him and his art hostage.

At that distance, with the battles won, it worked for Mozart to celebrate the escape of love from the clutches of power, and the victory of forgiveness over the desire for revenge. It worked, in the same way the comic treatment of suffragettes worked in Mary Poppins, because the victorious battle was in the past, and the antics of cardboard characters was appropriately comic.

But despite Mozart’s marvelous music, impeccably presented by Tafelmusik directed by David Fallis, and ornamented by the angelic dancing of Jeanette Lajeunesse Zingg’s dancers, the appeal of the characters wore off on me after a while, and their antics grew stale because, however lively and colourful, they were just cartoon characters, without depth, and considering the context, out of their depth.