Posted on November 3, 2013 by Stanley Fefferman 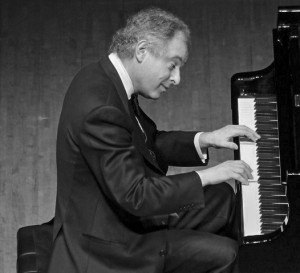 My benchmark performance for Bach’s Goldberg Variations is the 1981 recording in which Glenn Gould presents his “discovery of slowness.” Gould put it this way: “ With really contrapuntal textures, one does need a certain deliberate-ness.” From that vantage point, I noticed that Andras Schiff took Bach’s opening “Aria” at an even slower pace than Gould’s, giving it softer, more rounded contours, developing an air that favoured delicacy over sprightliness. Schiff made the utter peacefulness of the “Aria” vivid.

Schiff’s colour-balancing of Bach’s contapuntal textures throughout the hour-long work was astonishingly consistent. His attention to harmony and shading was authoritative, and his transitions from gravity to grace and back were supple and somehow bouyant. Schiff’s hands worked as if they each had a brain of their own, cooperating in the virtusoic concluding toccata-like variations to create intricate filligrees studded with pearls. Whether the mood was sweet, wistful, plaintive or fleet, Schiff showed himself at ease, and an amused smile of enjoyment never left his face. The concluding ‘Quodlibet’ was boldly dramatic, and from there Schiff ramped the “Aria da capo” down through a series of variations that restored, exactly,the Aria’s original utter peacefulnes: in that Schiff let the whole hall rest for a long time before opening to the upwelling of ovations.

Beethoven thought that the waltz Diabelli offered to him and to the other 49 “greatest composers of the Austrian empire” as the subject for a collection of variations, was pretty small potatoes. Nonetheless, Beethoven decided to join the company of composers who accepted Diabelli’s offer, notably, Schubert, Hummel, Wolfgang Mozart, his own student Czerny and young Liszt. Beethoven’s reason for doing so, Schiff has speculated, was “because of the Bachian challenge.The Diabelli Variations, composed over a period of four years (1819-1823), are also Beethoven’s answer to the question “what to make of a diminished thing.” He made it into what Alfred Brendel has termed—”the greatest of all piano works.”

Andras Schiff began by coarsening the contrasts in Diabelli’s banal waltz until it unquestionably merited Beethoven’s ridicule as “that botched piece of cobbling.” Schiff sustained long silences between phrases of the stentorian march that followed, inclining the tone of the discourse further towards comic parody. The soft, tinkly, subtle treatment of the third variation led to the fourth which is lyrical and lovely. With each variation the mood, the pace, and the style changed along a line that ran from the sublime to raucus buffoonery dotted with ha-ha-ha laughter that got the whole audience laughing.

There followed sweeter and sweeter melodic lines, comic opera arias, tones that seemed to float up like surrealistic hallucinations from the void, elegaic serenades, wistful adagios, passages from Caliban’s “isle full of noises,/ Sounds and sweet airs that give delight and hurt not…and show riches ready to drop.” Schiff’s treatment is evidence for his stated belief that Beethoven’s “whole personality and all the different sides of his character [are there.] I would call it his most Shakespearean creation…[where] the dramatic, the lyrical, and the comic [are] united.”

In this concert, Andras Schiff united the two greatest set of variations for keyboard into an heroic Odyssey and brought us safely home.