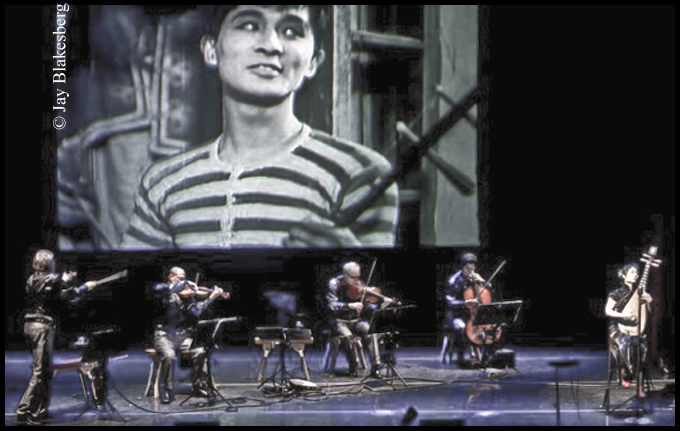 It was the best of times, and the worst of times:  an evening of thrilling harmonies bookended by episodes of godawful noise. Kronos Quartet is fearless in extending the frontiers of what makes music, and both process and product can be so much fun. Sometimes, as in first and third segments of Terry Riley’s The Cusp of Magic (2005), and the closing segment of A Chinese Home, the ‘music’ sounded like fun for the drunks next door still partying at 2:30 A.M., and you are calling the cops for the third time.

The best of times has Kronos as a quintet with the addition of Wu Man and her pipa, the four-stringed, 24-fret chinese lute. In her hands, the pipa has a whole orchestra of sounds in it, from hail on a tin-roof through Flamenco rolls, blue notes, crisp Chinese licks, cries of human voices, and chords that blend right in with a classical string quartet. In a world premiere of the chamber arrangement of  Orion:China by Phillip Glass, Wu Man opens with a high, warbling passage over an ostinato string accompaniment. The pipa conjures a melody that that mesmerizes as it dips and soars in thrilling flights of harmonic homage to the vastness of the starlit night sky that unites us all.

The mood changed but the level of sheer beauty was maintained during the Canadian premiere of Rahul Dev Burman’s Bollywood classic Mehbooba Mehbooba (Beloved, O Beloved). Kronos cellist Jeffrey Zeigler plucks a baseline of complex Bengali rhythms over which violinist John Sherba leads a gorgeous melodic line across a background of string ensemble and  overdubbed samples. They end the set with excerpts from Tan Dun’s Ghost Opera. There is no composer more creative and tasteful than Tan Dun, and Kronos mirrors his spirit in a most satisfying way.

The second half of the concert was devoted to the Canadian premiere of A Chinese Home, the four-part work that represents China of the distant past, of the WWII era, of the Maoist revolutionary era, and of the present “Made In China” period.  Conceived by Wu Man, Kronos founder David Harrington, and director Chen Shi-Zheng, this suite of 24 songs is played and acted by the musicians who do several onstage costume-changes on an elaborate set, elaborately lit, backgrounded by video and sampled audio.

The creativity at all levels of this production is simply overwhelming. If Kronos put out a DVD of A Chinese Home, I would own it, for sure, but would turn the sound off in “Part IV”. Otherwise, I would explore the amusing impression that Chinese music has a lot in common with  Euro-Ballroom Schmaltz, Gypsy Swing, and Appalachian Hoedown fiddling.  Wu Man’s vocal stylings with Kronos deserve to be put on a longer set-list and recorded on their own.

Finally, the residency of Kronos Quartet and Wu Man in this year’s Luminato Festival brings Toronto a big step closer to the big time in New Music.

The Luminato Festival continues until June 19