Luminato presents One Thousand and One Nights reviewed by Stanley Fefferman 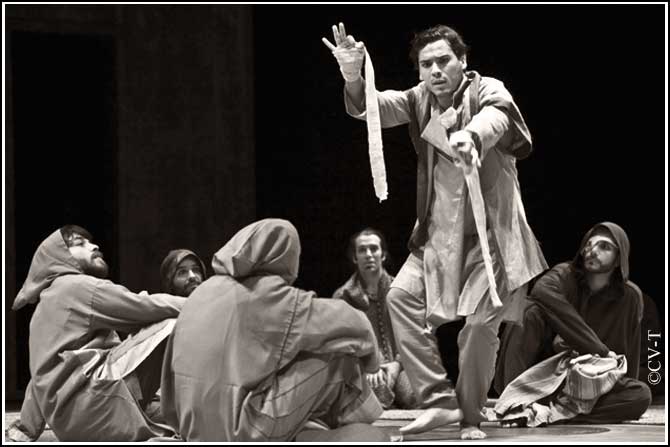 Which is the most basic human instinct? Procreation through sex? Survival through violence? Escape through story-telling?

In the original Arabian shaggy-dog story, One Thousand and One Nights, King Shahrayar discovers that the pleasure of listening to the stories that Queen Shahrazad tells night after night compels him to postpone performing acts of sex and violence on her body and on the bodies of his supply of virgins.

One Thousand and One Nights also presented us with perps pardoned for capital offences who beg to remain in  court so as not to miss the next story by one of their co-defendants. Such is the argument of the six-hour long Dash Arts production directed by Tim Supple and commissioned by Luminato.

The argument for the primacy of story-telling over sex and violence is compelling. This production’s narrative compels us to open to the unfamiliar. We are not used to plays whose premise is that all women are driven by lust to deceive their naive husbands and thus deserve to be raped, murdered, and mutilated. Our play-going ears are unused to the guttural sounds of Arabic, the main language of the characters who also meander in and out lines delivered in flavoured English and French. But the sheer power of the story-telling, enhanced by Supple’s spare direction, over-rides any hesitation and compels us into thinking about one thing and one thing only: what happens next?

And next, and next, and next, and again, next. For the price of a ticket, Dash Productions offers a super-sized feast of theatre and music. The display of energy demanded by Hanan al-Shaykh’s bigged-up book is enormous. The actors don’t merely declaim their lines. For six hours they simulate fighting and fornicating; they run, rage, dance, chase, debate and engage in marathon harangues. The pace of the play is unrelenting and, to their credit, the energy of the actors doesn’t flag for a moment. I won’t say, with many other reviewers, that the script needs work. But, ‘putting it my way but nicely.’ there were moments when I wished I could be somewhere else, and have a bit of peace and quiet.

That said, there were highlights. Houda Echouafni, stellar as Shahrazad, and an outstanding narrator, let go into a heart-stopping display of rage as the woman who was buried alive. Assaad Bouab maintained an impressive cool  for long periods in kingly roles.  Ramzi Choukair  just kept on keeping on as a won’t-quit, button-holing story-teller in many roles.

The production team made you believe things were happening when they were not, such as a husky jinn getting in and out of a wine-bottle. The music designed by John Gzowski had many virtues, not the least its  buoyant way of not being there till you noticed it was. Great lines like these on the cleverness of women: ” She could milk an ant,” and “She could sew nickers for a flea.” Many scenes so psychologically real they felt like an invasion of privacy. A general sense of the haunting wisdom of the stories that examine human life through a kaleidoscopic range of perspectives.

Finally, there is the politics of the play. The text, written in Arabic by the Lebansese feminist writer, Hanan al-Shaykh, and partnered by Toronto’s Luminato, is the brain-child of  a Jewish director, Tim Supple. This coincidence has to be seen as tantalizing contribution to an important story-telling  project—the”rewriting the Narrative of the Middle-East.”