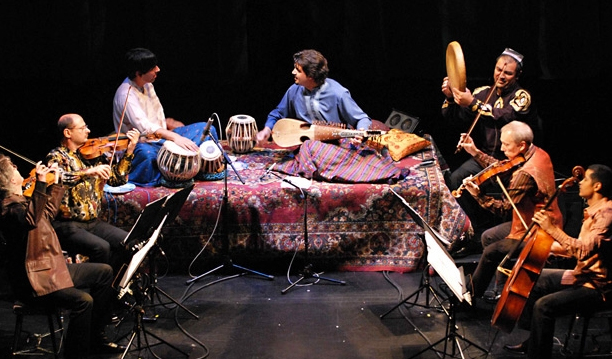 Kronos, the String Quartet ‘without borders’, started out 30 years ago playing music from Vienna—Haydn, Mozart, Beethoven. The story of their adventures to diversify the repertoire for string quartet is a musical oddysey through the realms of contemporary composers in classical, rock, jazz, new, electronic, and world music.

The program they offered at this Arab-oriented Luminato Festival included music from Iran, Syria, Lebanon, Serbia, and Central Africa. Featured in the concert is a happy collaboration with the outstanding Afghan rubab player, Homayun Sakhi and his trio. The point here—if there is a point to music—is symbiosis: collaboration with avant-garde that helps transmit traditional heritages and develop contemporary forms.

The first half of the concert was Kronos, amplified and sometimes supported by recorded sounds and video, performing five compositions, some of which got the visibly ‘hometown’ crowd cheering, and some drawing polite applause. La Sidounak Sayyada by Syrian folk-pop legend Omar Souleyman, a wild dance-tune with a heavy backbeat, got a few of the men in my row to stop fiddling with their Blackberrys and, at the end, brought them whooping and whistling to their feet.

Saba Aminikia’s String Quartet No. 3: A Threnody for Those Who Remain (2010), that opened the concert, was a lot more ‘serious’ musically and thematically. Amplified Kronos plays against an overdubbed background of war sounds and children’s voices reminiscent of the 1980’s Iraq/Iran conflict after the overthrow of the Shah and the subsequent Islamic revolution. The cellist plucks a heavy 2-note ostinato and the strings build up some very fast dance rhythms. An abrupt halt follows, and against a repetitive drone arises the echoey blurred-in-memory lamentation— the ‘threnody’—music memorializing the dead.  The work ends with sounds of a new day: radio static, birdsong, the call for morning prayer and melodious instrumental work.

The surprise piece was the Aka Pygmy Bowiya—song of mourning over a corpse. Jeffrey Zeigler’s solo cello leads a multi-layered harmony along a sliding line of microtones that sounded Chinese to my ears, and very beautiful. The applause was conspicuously polite. But the traditional Lebanese Wa Habibi earned serious applause, and no wonder, since the Kronos arrangement is based on an Easter hymn popularized since the 1960’s by legendary singing celebrity of the Arab world, Fairuz. This verse and refrain–almost a lullaby–repeated with harmonic variations sounds so ‘klezmer’ you almost have to wonder why there isn’t peace in the Middle East.

The set ended with the most interesting piece of the evening, a Kronos commission by Aleksandra Verbalov (b.1970) called …hold me, neighbour, in this storm… (2007). The work blends prayers and tavern songs, classical string instruments with Balkan strings and percussion, live shouts and foot-stomping, tolling bells, ticking clocks, electronic human calls, overdubbed children’s voices, and in the gaps between prayer and song, right on cue, uninhibited live commentary from the ladies sitting in the seats adjacent to mine. In all, the performance of this piece was as witty and spirit-lifting as a  tune by Zappa and The Mothers of Invention.

The opening solo by the Homayun Sakhi Trio, exciting for its virtuosity, (but otherwise not so much), served to  introduce the basic vocabulary and syntax of this rubab ensemble. The rhythmic and musical elements of Afghanistani music include melody, exposition and development organized according to principles of Indian Raga: the initial slow, extemporized free rhythm developed on by the rubab-player alone; the emergence of a strong rhythmic pulse supported by the two-headed tabla (Salar Nader) and Abbos Kosimov on the Doyra (Uzbeki frame-drum); the alternation of high and low-pitched drone effect alternating with pure melodic patterns that build to a blinding frenzy and subside into a slow eddy that eventually builds to new peaks of excitement.

The featured collaboration, Rangin Kaman (Rainbow) 2008, is a Homayun Sakhi composition arranged by Stephen Prutsman to be played with Kronos. Kronos starts it with a sequence of slow waves and thematic material played arco and pizzicato. The rubab’s voice enters as a piano piano drone and joins in dialogue with each of the Kronos strings playing quiet chromatic riffs. When the percussion enters, the whole thing lifts off and makes a long flight through a pattern of climaxes and slow dives that ends in a dance towards a multi-spasmed celebratory ‘tutti’ climax and standing ovation.

Please feel free to offer your comments to StanleyFefferman@OpusOneReview.com