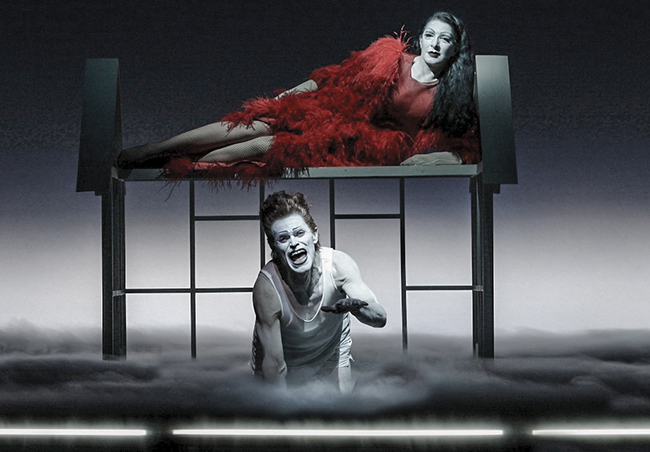 The opening tableau has three pissing-real Dobermans prowling the stage dressed with three fake-dead Marinas propped on coffins. The closing tableau has real Marina Abramovic and cast led by monumental Anthony Hegarty singing the hypnotic “I become a volcano of snow.” Between is a flow of scenes as vivid as the hieroglyphics on a royal Egyptian pyramid. For two and a half hours of Robert Wilson’s brilliantly inventive theatre/anti-theatre opera performance-art circus masque musical ballet cinema cabaret, the unexpected happened and kept on happening. It was an orgy of pleasure celebrating Marina Abramovic’s lifetime of pain. It was a banquet of delights prepared from the ashes of disappointment. It felt so good, so right, I just wish Frank Zappa, Rimbeau and Hieronymous Bosch could have been there too. They would have loved it.

What more can I tell you? Red-wigged, white clown-faced Willen Dafoe narrated the dolourous events of Marina’s life–abused by her mother, betrayed by her lover, celebrated by herself in performances of artistic self-mutilation. Dafoe is all-knowing and shifty as the devil. Sometimes he’s in army khakis sunk in a wall-less clutter of boxes, archives and newspaper clippings that rises from the orchestra pit; and sometimes in his skivvies he crawls on hands and knees through a cloud of stage smoke singing falsetto “WHY-Y-Y-Y-Y did you cut yourself?” His accents, shifted from Eastern-European to 42nd Street wise-guy, his phrasing volatile, unpredictable and expressive as the trickle of blood from a razor cut. His song is followed by Marina as herself singing “Bye-bye pain, bye-bye fear, bye-bye death.”

Clips from a behind-the-curtain film entitled Bob Wilson’s “The Life and Death of Marina Abramovic”  by Dafoe’s wife Giada Colagrande, talking head inteviews with Marina, and extracts from Marina’s 2010 one-woman MoMA show The Artist Is Present, add to the collage.

Marina, as herself, punctuates Dafoe’s narrative by walking across the stage robed in ceremonial black, her face frozen in a sardonic knowing grimace, the clack of her boot-heels amplified like the dotted line where the executioner signs his warrant. From time to time Antony Hegarty takes the stage, a head taller than everyone else, cloaked like the fairy good-mother, oozing celestial consolation from every note of songs like “The cut on her face.” Traditional Serbian singer Svetlana Spaji´c leads a mesmerizing call and response that has a sound centuries deep. She also appears in the centre of a sequence featuring Serbian-costumed folk songs with soldiers, including Dafoe, doing intricate dance manoeuvres while barking through megaphones and waving white flags, as figures from Abramovic’s childhood glide on stage one after another.

I could go on about the excellence of iconic supporting cast members who descend a staircase nude, dress as a marina doll with bow in hair and get caught in  washing-machine wringer; the sets, the lighting, are all impeccable materials brought together by Wilson’s theatrical genius and his collaboration with the fearless Marina.

If you’d like to step into a space where nobody appears to be afraid of anything, get to see this show at Luminato’s continental premiere in Toronto, or elsewhere in North America after June 17.

Marina Abramovic is all over YouTube: this interview is a good place to start. http://www.telegraph.co.uk/culture/art/art-features/8059792/Marina-Abramovic-Im-a-mirror-for-the-public.html