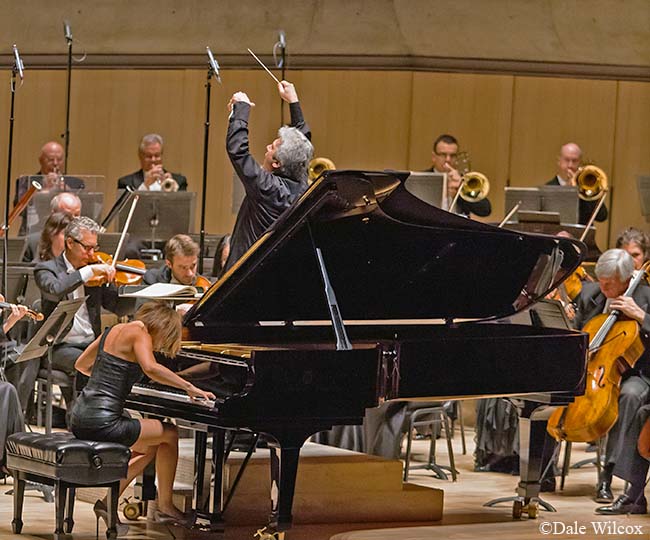 The music and the musicians at this Symphony concert were exciting.  Tiny twenty-something Yuja Wang in a rocking frock with silver killer heels dominated Prokofiev’s massive Piano Concerto No. 2. The TSO’s affiliate composer Kevin Lau, barely 30, sitting in the audience with his girlfriend and parents received ovations for the world premiere of  Treeship, an 11 minute futuristic fantasy commissioned by the TSO. Concertmaster Jonathan Crow show-cased his flawless skills as soloist in Rimsky-Korsakov’s ever-popular orchestral suite Scheherazade which also made room for stand-out solo-work by the half a dozen of the Orchestra’s section heads.

Treeship, scored for very full orchestra and percussion, takes off in a breath of winds out of which strings swell a romantic melody, gentle, with martial possibilities from timpani and snares fitting for films of heroic adventures in space. Quick shifts in textures create an exciting flow that is beautifully controlled by “Captain” Peter Oundjian a the helm. I especially liked how the closing martial theme was neutralized by eerie violins into a twittering that dissolved into space. Several ovations.

Prokofiev’s Piano Concerto No. 2. shocked St. Petersburg in 1913 but hardly raised an eyebrow in Paris 10 years later, which is to say it is a blend of ‘modern’ and post-romantic styles. It is undoubtedly propulsive and expressive, with solo parts so difficult, the composer himself could barely manage them: “…In the cadenza (specifically where I mark colossale) and at the beginning of the third movement, where the hands keep jumping over one another, I play badly. However, the rest I play well and with enthusiasm.” Yuja Wang played it all well and with enthusiasm.

Her speed was spectacular, her timing impeccable, and even the pianistic parts impressed with her nuancing of the flow. Nonetheless, only her performance of the third and fourth movements ignited my imagination. Heavy brasses open the third with rhythms of Prokofievian creatures marching in a phantasmagorical parade. Yuja Wang’s hands cross the keyboard like shuttles, clicking out chords, running long glissando’s, crystalline splashes and every kind of pianistic excellence.

In the finale, she produces an amazing blend of hard and soft, heavy and light figurations against the bombastic tones of tuba and bass trombone. Cellos and violas playing pizzicato usher in the emotional high point of the Concerto: a folksy Russian lullaby singing of the comforts of home together with family. Then excitement takes over from emotion: a spacey, dramatic cadenza follows that is suspenseful at first and darkly coloured. Yuja Wong unleashes the force and velocity of a keyboard display that careens at blinding speed from gorgeous to spectacular. Four ovations but, understandably, no encore.

To this day, Sir Thomas Beecham’s 1957 recording of Scheherazade, Op. 35 by Nikolai Rimsky-Korsakov remains the standard. Peter Oundjian kept the same tempos as Beecham and brought a similarly disciplined feeling to the work last night. This performance was recorded for publication in the future, and my impression is it will be as fine as Beecham’s. Certainly Jonathan Crow’s solo work easily matched Steven Staryk’s legendary performance, and the TSO’s soloists, most notably clarinetist Joaquin Valdepeñas, gave world-class performances.

Performances like this one draw the audience into a community of appreciation that is like an oasis in our gridlocked urban lives.