Centrediscs’ CD War of the Angels reviewed by Stanley Fefferman 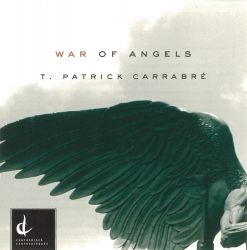 Centrediscs’ CD War of the Angels presents orchestral music composed by T.Patrick Carrabré between 1996-2003, and performed by The Winnipeg Symphony Orchestra conducted by Bramwell Tovey and Andrey Boreyko.

Carrabré’s music, written in an accessible style, is vividly imaginative. Although the works recorded here have their differences, they generally belong to a style I would characterize as early 20th Century Arcadian. They conjure the kind of idealistic, mythical landscapes you find in Debussy and Stravinsky, and Carrabré shares with the latter a preference for building musical structures on the kind of obsessively rhythmic skeletons that developed in mid-century into the minimalism we are familiar with in Philip Glass.

As the title suggests, Symphony No.1: The War of Angels (1996) employs martial modes like fife and drum, the rush of winds and roar of brass over ominous percussion. In the first movement, he builds anxious intensity with large orchestral forms that lurk in low register shadows and suddenly loom threatening, shrieking in voices that suggest human speech. The slow middle movement pits horns against the drone of basses that generate desolation, edge, tension. String melodies invoke a plaintive mood pulsing with a respiratory rhythm that creates a sense of expansion, not necessarily benign. The solo viola moves like a herd of large animals, like a band of humans walking on their knees, the last vestiges of a people. The finale moves quickly but still ominously, minimalist pulsing and twittering, jerky and spasmotic but somehow developing a lyrical, domestic tone. Fife and drum return, and the buzzing of flies that builds through perpetuo mobile to an orchestral climax.

The Dragon’s Tail (1997) is also ushered in with fife and drum but in the wierd way that suggests a fantasia by Prokofiev. When the ostinato percussive rhythm and brass fanfares get going to build crazy folk-dance rhythms we slide into the world of the Firebird. Carrabré conjures a menagerie of sonic creepy characters battling in fantasmagoric situations. This is a lively piece, bold, colourful and a little naive, not a bad thing.

Inuit Games (2002) surprises delightfully when out of a thicket of percussion and brass issue the rough, ominous panting of Inuit throat singers Pauline Pemik and Inukshuk Aksalnik. Their transparent sonics develop timbre, melody begins to creep in, and against muted pizzicati strings and simulated bird cries the singers weave a counterpoint of alarm  backed by medievally flavoured winds and brass, at which point the throat-singers and the orchestral players twitter into hilarity.

Symphony No.3 (2003) begins all drama, martial, querulous, the vying of timpani and sardonic brass. In the background of the first movement is a driving minimalist obbligato line over which orchestral bursts go up like clouds of smoke from field artillery. Movement two is moody, atmospheric with intriguing melodies in winds swelling big and dark without much rhythmic pulse. This is the prettiest movement, the most Arcadian companion piece to Stravinsky’s Petrouchka. You might like to hear this movement coming over your car radio sometimes. The finale starts quietly, tentatively, advancing pizzicato with mincing, creeping steps. Horns, winds, brass begin declaiming in repressed fanfares; droning basses swell into an orchestral tutti. Carrabré characteristically conjures a sequence of quirky voices in the form of a chorus advancing en masse, then hammers down a closing climax.

Recorded live by the CBC at Manitoba Centennial Concert Hall, and mastered by David Jaeger, this is a very well-made CD.