Luminato’s Concerto for Piano and Pasteboards reviewed by Stanley Fefferman 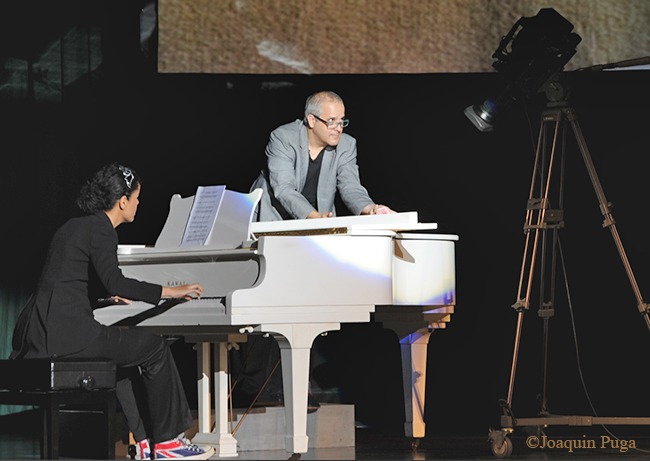 We enjoyed being fooled. We pay good money to people who can trick us. We long for the impossible, and what Miguel Puga does is impossible, but there it is.

To help us catch him in his onstage trickery while we are seated in an auditorium, Sr. Puga shows some of his illusions live on a big screen, so we can scrutinize his hands. For openers,  he mixes a deck of cards, draws the Ace of Hearts out of the deck, mixes again and draws again, until he has ‘randomly’ drawn out all the hearts in sequence from deuce to King. While his assistant at the piano, Ms. Paz Sabater, plays Manuel de Fallas’ El Amor Brujo (Love, the Magician), Puga turns the cards face down and their backs spell out EL AMOR BRUJO. Impossible! How did he do it? I’ve no idea, but I want to see him do more ‘magic’. And he does.

A boy and a girl from the audience are invited to the stage. Puga gives them each 10 cards which each holds sandwiched between outstretched palms. The boy is told to chose a number from 1-10. He choses 3. Puga tells the boy to imagine teleporting a card to his sister. He does. Puga counts the cards sandwiched between the boy’s palms. He now has 9. His sister has 11. The trick continues until 3 cards are ‘teleported.’ Puga does a count: the boy has 7 and his sister has 13. Impossible! How did he do it?

Miguel Puga, was brought by Luminato from Granada, Spain to perform his “dramágico art,” —illusionism as performance art. Art? I don’t think so. Puja is brave. His Spanglish is not so good, his smooth manner visibly marred by nerves, his showmanship tainted by deliberately homophobic slurs towards his male assistant, so that I was amazed but not amused, except when Puja left the stage saying it was time for a piano solo. Then the pianist left the stage, the lighting narrowed to a spotlight on the piano, and the maligned male assistant, Luis Brito came out and placed a big placard on the piano which read PIANO SOLO.

The final trick of the evening was purely delightful. Cleverly titled “Sonata for Piano and Strings”, Miguel (aka Magic Mike) manipulated a metre of string, cutting it, tying the sections together in knot, making it whole again, joining the ends so they form a perfect loop; taking another bit of string from his pocket and knotting it onto the loop, he smoothed the two together and ended up with the original length of string which he tossed to a kid in the front row.

I don’t care how he did it. Being fooled is fun. That’s why we have Mayors, Senators, CEO’s, and Heads of State.