Posted on January 28, 2013 by Stanley Fefferman 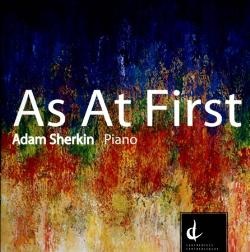 During the past three years, Adam Sherkin has developed a reputation as a go-to pianist for really difficult works, be it by John Adams, Harrison Birtwhistle,Tazul Izan Tajuddin, Luciano Berio: you name it—Sherkin will play it. But from the start, he let it be known that he was a pianist-composer, so it’s a timely thing to have this first recording of his works.

The title composition bursts out of the gate in an opulent rush that evokes movement of the whole body. “As at First (2011)” exhibits Sherkin’s preference for well-made three movement forms marked by delicacy and elegant playfulness. His piano tolls deeply and trills, balancing rolling chords in the left and runs in the right, tending in tempo toward a walking andante. His preferred mood is contemplative, reflective, dreamy, dissonant enough not to be easy or predictable, and in the final movement picks up passion rising sometimes to urgent alarm that rumbles in the bass. Cells that sound minimalist build beautifully, rising to rhapsodic with rolling arpeggios aslant slow paced melodies.

The CD’s opening composition, “German Promises (2011)” announces a kind of hidden program that I don’t get. Like most of Sherkin’s compositions here, it features repetition and iteration in a fashion associated with American rather than German music, and if I had to peg his work on another composer, I would choose Ann Southam, but that is of no importance. What matters is the fine woven mesh of musical lines Sherkin makes, balanced and symmetrical that shifts but never abruptly. Here as elsewhere, there are patches of dark chordal hammering, long silences, and rippling arpeggios suggesting a drama, perhaps romantic, possibly French.

My favourite pieces are the three very short “Meditations (2006)”, the first delicate, unusually melodic and tranquil; the second more perky in colouration and affording single notes duration to expand and fade away, and the third looming larger and more darkly. “Day Currents (2009)” is unique for its gnarly energy and turbulent emotions. “Three Preludes” show Sherkin’s hand in hardedge designs, fragmented, edgy, disjointed wit, as well as a taste for melodramatic sentimentality verging on nostalgia.

There is craftsmanship in this debut album well worth hearing, and a sense of daring in the restraint with which Sherkin handles his virtuosity, giving rein instead to subtle shifts of sense. I expect in the next album, Sherkin might choose to be less careful and trust more in his original voice. Till that time comes, As At First, splendidly produced by David Jaeger, offers some special listening.

This entry was posted in CD Review and tagged Adam Sherkin, As At First, David Jaeger, OpusOneReview. Bookmark the permalink.